Nothing shouts “we’re vegan here,” and the menu offers a number of dishes that should please mainstream diners 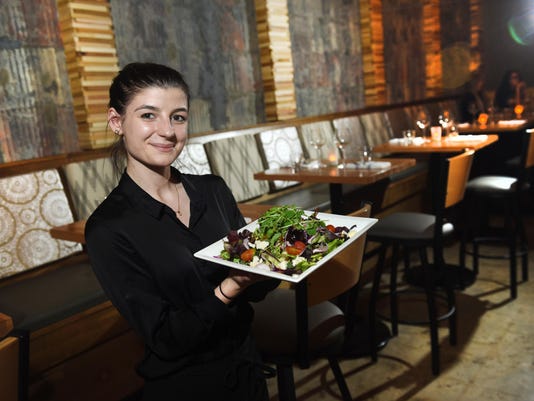 Claire Simler, server, holds one of the many salads offered at the downtown Ferndale vegan restaurant on Nine Mile.(Photo: Photos by Max Ortiz / The Detroit News)Buy Photo

Vegans have found a haven at this Ferndale café. And that’s probably no surprise to anyone.

What is something of an eye-opener, is that the high standards in food, service and atmosphere are bringing in people who do not restrict themselves to a strict plant-based diet.

The woodsy high-ceilinged setting has all the amenities of a mainstream restaurant. There is a handsome bar, with a full complement of craft cocktails, wine and beer, a professional service staff and high quality tableware and china. The fact that there are no animal products involved, not even milk and butter, soon becomes irrelevant to those who sit back and enjoy the rustic surroundings including candlelight and soft light from open filament bulbs, soothing background music and potted plants.

Seating arrangements include the polished wood-topped bar and its comfortably upholstered chairs to two-tops along the wall and larger tables in the second of the airy two room space. It’s a relaxing setting without the distraction of blinking television sets.

Nothing shouts “we’re vegan here.” And the menu offers a number of dishes that should please mainstream diners who join their vegan buddies for dinner, as long as they can focus on what’s on the menu rather than what’s not.

The Caesar salad, for instance, even if it does include kale and tofu along with romaine in its garlic-caper dressing. It is one of six salad offerings that head the menu. With a cup of one of the nicely garnished house soups, tomato or mushroom veloute, a salad might be enough to qualify as a main dish, especially for those who also order one of what the menu calls “morsels.” Choices on that list include redskin potatoes, roasted or steamed cauliflower and a mix of parsnips beets and carrots.

There are entrees, of course, the sturdiest of which is the tamale pie, masa dough heaped with corn, tomato, onion, black beans and finished with enchilada sauce and cilantro and accompanied by cashew sour cream and avocado. Other entree options include the green curry bowl heaped with brown rice, bell peppers, onion and herbs in coconut curry and a pasta dish, pesto rigatoni with roasted fennel, peas, red peppers and greens.

Desserts are typified by cherry and apple tarts and chocolate avocado pudding.

The menu was devised by culinary consultant George Vutetakis, former chef and proprietor at Inn Season in Royal Oak and a cookbook author who has been in the vegetarian/vegan movement for many years, which gives a stamp of authenticity to the GreenSpace cuisine.

Parking: Nearby metered lot and street; valet on Fri.-Sat.