Cozy, low key restaurant has kept its menu enticing over the past decade

In the rush to check out the flashy newcomers to the local restaurant scene, it’s easy to overlook veterans who’ve been paying their dues for years. One is Café Muse, the little spot tucked into a vintage storefront in the heart of downtown Royal Oak. It just celebrated its 10th anniversary, and to survive in this volatile business for that span is a real achievement.

Hands-on proprietors Greg Reyner and David Smith opened Café Muse in 2006 in tiny quarters on the railroad tracks just down the street from its present location, and when the liquor license was acquired, it moved uptown and tripled the original 20 seats. It’s still small enough to be called cozy, and some of the original dishes are still on the contemporary American menu, notably the shrimp salad on housemade cheddar bread, and the grilled fontina, mozzarella and Havarti cheese sandwich, which got its 15 minutes of fame when a TV personality touted it. And the price hasn’t gone up very much, remarkably. It’s $8.95, less than a dollar more that the price six years ago.

Café Muse offers solid value, especially given the quality, because Reyner, who is the chef as well as the proprietor, is focused on fresh ingredients from local sources whenever possible. The farms and purveyors are listed on the menu, such places as Zingerman’s Bakery and Otto’s chicken farm that provide the raw materials for his scratch kitchen, and he was doing this long before it became fashionable.

The presto primavera risotto illustrates one of the many quality statements being made at the venerable Café Muse in Royal Oak. (Photo: Steve Perez / The Detroit News)

This is a place sure enough of itself that its owners aren’t tempted to jump on the latest trend bandwagon. If you look at today’s menu and one from say, five or six years ago, you won’t find any abrupt change of direction. That does not mean Reyner’s dishes aren’t updated. He puts a Moroccan glaze on pork tenderloin, adds a short rib to mac and cheese and gives scallops a dusting of curry, for example, yet he sticks to his roots.

Lately, more and more diners are ordering breakfast dishes at lunch, and it’s easy to see why, when the fresh fruit and whipped cream-lavished buttermilk pancakes or one of the fluffy egg scrambles arrive at the tables on big white plates. 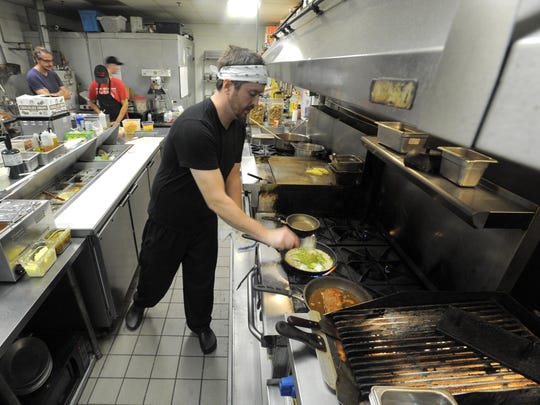 The setting in the tin-ceilinged dining room is attractively understated and amenities include cream in little pitchers, cloth napkins and a nice sense of propriety without formality. The adjoining bar opens at 5 o’clock happy-hour time, although cocktails and other beverages are certainly available any time, notably the mimosas and Bloody Marys that are the typical brunch drinks.

Café Muse is a restaurant that whispers, not shouts.

Parking: Street or nearby municipal lots