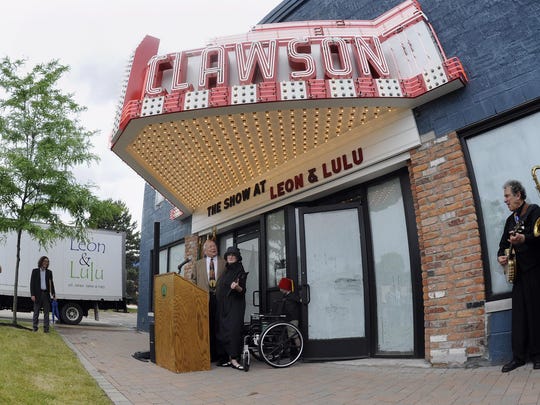 The historic former Clawson Movie Theater, which they call "the Show" is where Mary Liz Curtin and Matt Prentice will open Three Cats and a Cook, a small plates restaurant with a full bar. (Photo: Jose Juarez / Special to The Detroit News)

Mary Liz Curtin and chef Matt Prentice, two well-known pillars of their respective industries — quirky and fun lifestyle retail and restaurants and catering — are plotting to open Three Cats and a Cook, a retail-restaurant hybrid next door to Curtin's home decor and lifestyle shop Leon & Lulu in downtown Clawson.

Details are still coming together for the 100-seat cafe, but "a firm handshake" is in place and the plan is to open the casual fine dining restaurant with small plates and a full bar in late spring in the building they call "the Show," formerly the Clawson Theatre.

Curtin currently has her Three Cats Cafe bistro-style restaurant in this space, as well as greeting cards and other retail offerings.

"Three Cats Cafe is going to grow up and become a really fancy restaurant," said Curtin, who owns Leon & Lulu with her husband Stephen Scannell. "This, to me, is a restaurant dream come true."

The retail aspect will stay, but Three Cats will morph into Three Cats and a Cook with Prentice on board. Curtin says Three Cats Cafe will remain open and operating for the time being.

"It' will be a Michigan-centric menu and Matt has total creative license to shine," she said. "Food is going to be fabulous."

Detroit diners haven't seen much from Prentice during the past six years because of a temporary non-compete order set upon him by a former employer. He was the chef behind successful and popular Metro Detroit restaurants of the past three decades including Morels, Shiraz, Coach Insignia, Detroit Prime and others.

“I was freed up in October and I’ve looked at 30-40 different things before I finally found one that I thought would be interesting to do,” said Prentice, who has been living in Midtown and taking note of what Detroit restaurants do differently than those in the suburbs.

“From what I see, the suburbs are not really keeping up with the gravitation toward small plates,” he said, adding that his small plates menu at Three Cats and a Cook will gravitate toward American food that’s affordable, with a $20 lobster dish at the top of the price point.

Not only will the food menu be influenced by domestic ingredients and styles, but the bar menu will have mostly wines from the United States, only Michigan craft beer and as many American-made spirits as possible.

“There will be a serious focus on vegetarian on the menu and a pretty decent focus on vegan,” he said, explaining that he means there will be non-meat dishes on the menu, not meat substitutes. “I’m not trying to make an Impossible burger. I don’t get into that, more so just clean-cut cooking.”

Curtin, who said she is all about "setting the table," said she couldn't imagine a partnership like this with anybody but Prentice.

“Matt’s been looking for just the right fit, but this is the perfect fit because we have the same attitude toward our customers," she said. 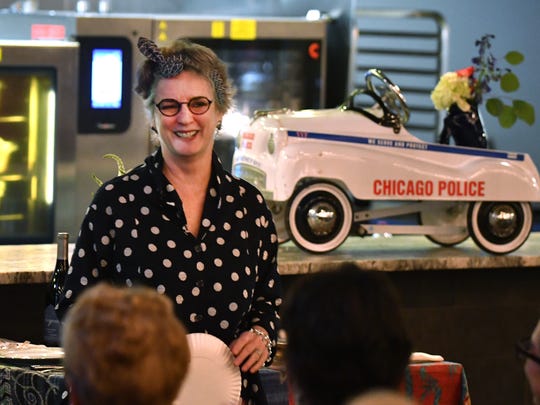 Because of the retail component, the front of house will be changing all the time "because all the furniture is for sale," said Curtin, who says they also sell greeting cards and Michigan-themed gifts. "You'll get a different experience each time."

"Our concept at Leon & Lulu is that we want you to come in and have a great time whether you leave with a bag in your hand or not," said Curtin, "And Matt and I feel that next door when you come in you're going to have a wonderful meal with us, the prices are going to be good, the food's going to be fabulous. It's going to be a wonderful place dedicated to our customers."

“Clawson is a cool little area with everything going on,” Prentice said. “You’ll be able to park and walk in the door, and you don’t have to work, and it’s kind of a small town yet it’s in the middle of everything. It attracts me.”

“I’m only going by my gut," he said. "Mary Liz is going by her gut and I guess we’ll find out in June if our guts are right.”