Scheduled to open this fall, the new restaurant will seat around 200 and will have a full bar

Scheduled to open this fall, the new restaurant will seat around 200 and will have a full bar 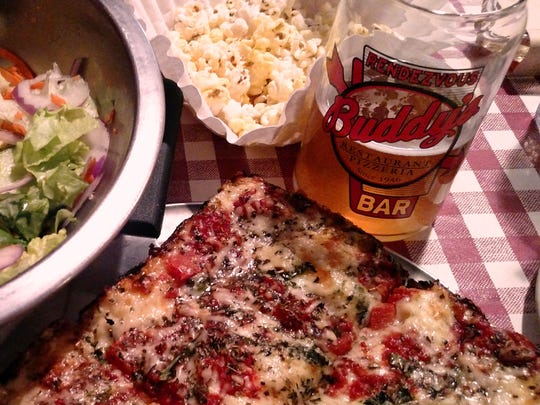 Buddy's Pizza is planning a downtown Detroit location in the Madison. (Photo: Courtesy of Buddy's)

After decades of expanding to seemingly everywhere in town except downtown Detroit, Buddy's Pizza has announced a restaurant is coming to the Madison in Grand Circus Park.

"We're coming downtown. It's official," said a tweet from the iconic pizza company Tuesday afternoon with a photo of the Madison Building marquee hosting in image that reads "Coming Soon: Buddy's on Broadway."

Buddy's chief brand officer Wesley Pikula said they are hoping to open the downtown location by fall, before the Thanksgiving parade.

"I've been here 44 years and I can't tell you how excited we are," said Pikula, who started as a dishwasher at the original Buddy's location and is now one of the company's chiefs. "I remember ... delivering pizzas so many times downtown to the Ford Auditorium or the Fox and to be now in that space in a historic area (it's amazing)."

He said the fact that the Madison, which was formerly a theater, was one of the first building's Dan Gilbert acquired "makes it even more special."

"I think anyone that loves Detroit, if you're not excited about what's been done in the city and all the great things, then you're not a Detroiter," he said.

Pikula said Buddy's on Broadway, which will be on the first floor where Angelina's Italian Bistro was, will have a full bar and seating for about 200 inside and another 25 on an outdoor patio along Broadway. There are plans to have a grab-and-go element to make it easier for people looking for a quick take-out lunch.

Dating back to the 1940s, the beloved deep dish pizza makers began in the city proper at its Six Mile and Conant location, which is still open. Since then Buddy's has opened several suburban locations, including inside the Detroit Zoo. There are plans to open a Buddy's in Grand Rapids this spring.

The Bedrock-owned Madison building is at 1555 Broadway in Detroit. It's a mix of retail, office and event space which also houses Ache Supply Co. coffee shop, Skidmore Studios and Detroit Venture Partners.