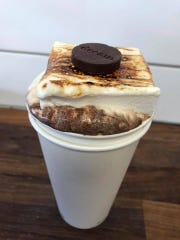 Spring is bringing a shower of new restaurant openings. From pizza to Peso Bar, here's what is coming this spring, including some spots already up and running.

Treat Dreams Dessert Emporium: Ferndale favorite Treat Dreams has expanded into a Dessert Emporium with super-charged sweets like a 5-pound ice cream sandwich, plus locally made products including Guilt Chocolates bon bons and truffles. The upgrade is part of a collaboration with gourmet dessert company D'Vine Cookies. The Dessert Emporium is open now at 22965 Woodward in Ferndale. (248) 544-3440.

The Brakeman: This new beer hall is part of the Shinola Hotel and has two bars. It's connected to fried chicken concept Penny Red's, which serves within the bar and also to-go. There's also a cocktail bar with frozen drinks. It's casual enough where they don't take reservations, but they also don't take cash. Credit cards only. It's open daily at 4 p.m. after debuting Monday at 22 John R, Detroit. thebrakemandetroit.com.

Barter: This new Hamtramck space was shooting for a fall 2018 opening, but opening plans seem to change more often than not for new bars and restaurants. Instead this art space and cocktail lounge will debut this weekend. The owners are a trio from New York City (although one has roots in Metro Detroit), and they told me they chose Hamtramck because it has "the right vibe." Check it its opening weekend noon-2 a.m. Saturday and noon-midnight Sunday at 11601 Jos Campau, Hamtramck. (313) 707-0986.

Once open next month in Detroit, Peso Bar will serve Mexican food and cocktails. (Photo: Courtesy of Peso Bar)

Peso Bar: Located where Fist of Curry operated for just a few months, and Huron Room before that, Peso Bar will hopefully have a longer shelf life. The Mexican restaurant will have a focus on tortas (sandwiches) and cocktails. One of the guys behind Peso is Eddie Vargas, who knows his way around a margarita to say the least. Expect the drinks here to be the star with specialty cocktails like Frida Kahlo, which has tequila, citrus and coconut. Opening in April at 2547 Bagley, Detroit. facebook.com/pesobardetroit. Also gearing up to open soon is punk rock cocktail lounge Bagley Central next door at 2545 Bagley.

Detroit Vineyards: Urban wine-makers Detroit Vineyards, which has been making wine for a few years now, are opening a tasting room inside an old Stroh's beer factory. They'll be open seven days a week starting May 3, serving its riesling, chardonnay, ciders, Motor City Mead and other products. 1000 Gratiot, Detroit. detroitvineyards.com.

Como's: Peas & Carrots Hospitality have taken over and completely gutted the longstanding Ferndale pizza parlor that was plagued by health code issues in its later years. Chef Zack Sklar is hoping to bring it back to its glory days while also changing the kind of pizza served to Detroit-style deep dish which he spent more than a year perfecting. Expect a spring opening at 22812 Woodward, Ferndale. 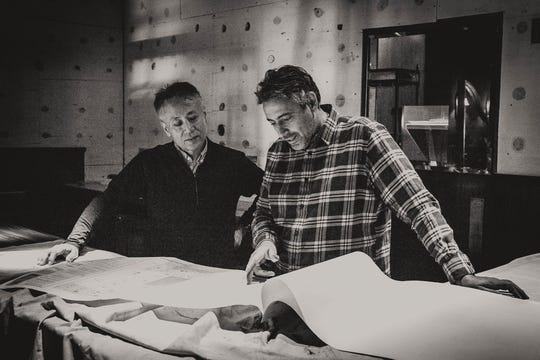 Chefs Takashi Yagihashi, left, and Luciano DelSignore are planning to open Pernoi in Birmingham this year. (Photo: Courtesy of Pernoi)

Pernoi: Two giants of the restaurant world, chefs Takashi Yagihashi and Luciano DelSignore, are teaming up to open a new spot that blends French, Italian and Japanese cuisines. It will be upscale, with dinner service five nights a week. Pernoi is expected to open some time this spring at 310 E. Maple, Birmingham.

Three Cats and a Cook: Another big name chef, Matt Prentice, is making his return to the dining scene with a restaurant in partnership with Leon & Lulu, which is next door. Three Cats and a Cook will be a mix of retail and dining, and will have a made-in-Michigan theme. The conversion from the existing Three Cats Cafe is expected to be complete by late spring. Find it at 116 W. 14 Mile in Clawson. (248) 288-4858.