La Cocina is a food hub in the San Francisco Bay area that develops and nurtures the culinary talents of entrepreneurs, particularly women of color and recent immigrants to the United States.

Imagining the diverse and bold flavors that may come out of such an organization, it's no wonder that a cookbook was born out of it. "We Are La Cocina" ($29.95, Chronicle Books) hit shelves last month featuring the stories and recipes of more than 40 of the program's alumni. 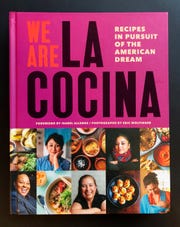 "We are La Cocina" is a new book featuring the stories and recipes of the women who have been through the La Cocina incubator program in San Francisco. (Photo: Chronicle Books)

To help promote the book in Detroit, several women who have benefited from the nonprofit kitchen incubator will appear at food events locally.

The book tour still has three events left in Michigan, including a Sunday evening dining event at Frame in Hazel Park, an eclectic kitchen space inside of Joebar restaurant.

Zigas will be in attendance at the dinner, which is a collaboration between La Cocina chefs Lamees Dabhour of Mama Lamees and Dayana Salazar of Mexican restaurant El Huarache Loco (both based in California). The multi-course meal will be a fusion of Arab and Mexican cuisines.

Dabhour was born in Kuwait and after marrying in the 1990s moved to San Francisco in 2006. “La Cocina” tells her courageous story of perseverance during an abusive relationship as well as providing recipes for her maqluba, an upside-down layered dish made of rice and vegetables, and her samak mashwe bilforn, an oven-baked fish.

Seatings are at 4 and 7 p.m. and the cost is $55 per person, plus tax and gratuity. Beverage pairings and copies of the book can be purchased for an additional cost. Get tickets at framehazelpark.com.

Next week in Ann Arbor Zigas, Salazar and Dabhour will appear at a dinner hosted by chef Bob Bennett, who will prepare their recipes as guests hear their stories. The meal starts with Salazar's Ensalada Doña Luz, a Mexican vegetable salad she named after her mother. The entrees, served family-style, will include Dahbour's fish dish from the book as well as jerk chicken from another La Cocina chef, Shani Jones.

Earlier in the day on July 29 Salazar will appear at an event at Zingerman's Bakehouse, 3711 Plaza Drive in Ann Arbor, where she will share her stories and cook huaraches, her sandal-shaped corn tortillas that are stuffed with beans and topped with braised meats and other ingredients.

Visit bakewithzing.com for information on how to attend the 12:30 p.m. lunch and class, which costs $45.

The "We Are La Cocina" book tour continues throughout the country. Visit lacocinasf.org for more information on the cookbook and the program.