Dining and food guide to Livernois' Avenue of Fashion during construction

Dining and food guide to Livernois' Avenue of Fashion during construction 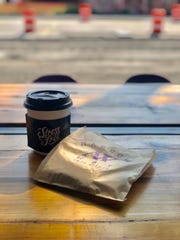 Coffee and a pastry from Narrow Way Cafe where construction barrels can be seen from the open-air seating. (Photo: Melody Baetens)

After chef Omar Mitchell debuted his new restaurant Table No. 2 on Easter Sunday on Livernois' Avenue of Fashion in Detroit, he said the place was packed every night they were open.

Then the construction started later that spring, and he said sales went down by 70% almost immediately. He's managed to entice some with two-for-one dining deals, and by adding weekend brunch, something he didn't intend on offering at his fine dining eatery.

"It's definitely tough," he said. "I had to reinvent myself to stay alive."

He said he's trying to appeal to the displaced customers of nearby Kuzzo's Chicken and Waffles, a popular restaurant on this strip that decided to close and renovate while construction is going on. 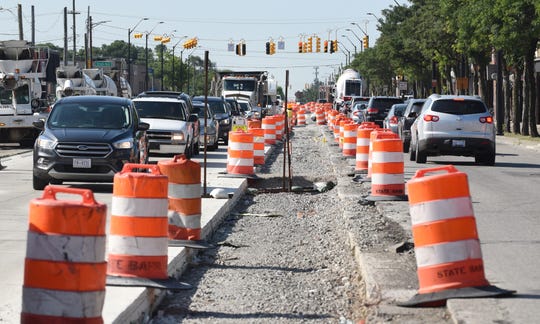 The city has created a loan program for dozens of shop owners who contend they have lost 40% to 60% of their business due to the city's overhaul of Livernois Avenue. (Photo: Max Ortiz, The Detroit News)

The widely publicized, multi-million dollar road project to improve the roads and sidewalks and add a bike lanes to a stretch of Livernois south of Eight Mile has business owners fighting to stay afloat. The construction eliminates street parking for several weeks, and while there is parking on side streets and in lots on Livernois, just the road being torn up is enough to distract customers.

"There's parking, you just have to be a little patient and look for the signs that are up now that say 'public parking,'" he said, adding that folks need to "a little more creative" about where to park.

The city has gotten creative, too. A series of fundraising events called Livernois Soup will kick off Thursday 6-8 p.m. at Table No. 2. There, businesses will pitch their ideas for improvements.

The best idea will be awarded a few thousand dollars to get started. Attendees pay a $5 minimum donation to have some soup and vote for their favorite pitch. Overall, $10,000 will be given to Livernois businesses through Livernois Soup events.

Last week the city of Detroit also started running shuttles noon-6 p.m. weekdays and noon-7 p.m. on Saturday to help shoppers and diners get around. Mitchell said so far he's not seen anyone use the shuttles, but it's still a new feature.

More: Fans of Detroit's Avenue of Fashion rally to help businesses during construction

More: Table No. 2 Restaurant to open on the Avenue of Fashion Easter Sunday

Mitchell said the car wash next door to Table No. 2 has allowed their guests to park there after 6:30 p.m. For other businesses like Good Cakes & Bakes and Narrow Way Cafe, the large lot near Mike's Fresh Market can be used.

It's not only the city and other Livernois businesses to keep the ones hurting above water. I've seen construction workers themselves waving cars into appropriate parking areas, and assisting neighbors on foot cross the street while the heavy duty vehicles chip away at the pavement. 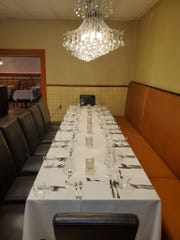 Seafood and steaks will be the specialty at new restaurant Table No. 2, opening April 21 in Detroit on Livernois near Seven Mile. (Photo: Courtesy of Table No. 2 Restaurant)

You can help by keeping these businesses in mind when racking your brain for where to get dinner or grab a cup of coffee or a snack.

Here's a quick guide to some of the food-related spots that are open and struggling through the roadwork, which is expected to last until November.

Baker's Keyboard Lounge: This historic jazz club is open six days a week with live entertainment and a full kitchen. They have their own parking lot next to the venue that is accessible during construction. 20510 Livernois, Detroit. (313) 345-6300 or theofficialbakerskeyboardlounge.com.

Narrow Way Cafe: More than a spot to get a nutty cup of coffee, smoothies and a flaky pastry, this cafe is a neighborhood hub where locals work and socialize. The motto here is "stress free," so if you're in a hurry order ahead on their mobile app. 19331 Livernois, Detroit. (313) 397-7727 or thenarrowwaycafe.com.

Legends Pizza On The Ave: Besides 'za, this spot has wings, stuffed potatoes, subs, salads and other food. Get delivery through the apps GrubHub, Uber Eats or Slice. 19163 Livernois, Detroit. (313) 759-8002.

Table No. 2: Opened for just a few months, this is one of the few white-linen restaurants on this strip. Chef Omar Mitchell serves seafood, steak and tableside dishes like the Caesar salad and bananas Foster. 18925 Livernois, Detroit. (313) 340-9550 or tablenumber2.com.

Biggby Livernois: Get a midday perk-up at this Avenue of Fashion location of Biggby Coffee, which serves frozen beverages for half price daily noon-7 p.m. 18685 Livernois, Detroit. (313) 468-9007. 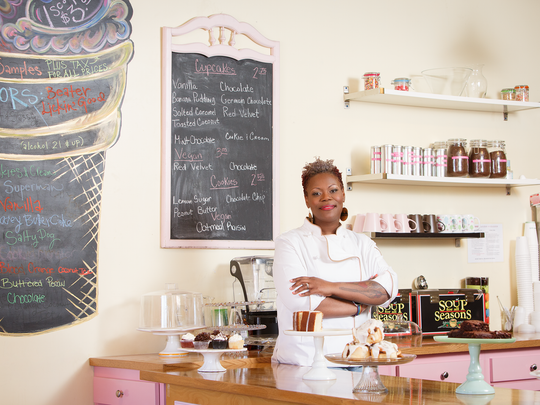