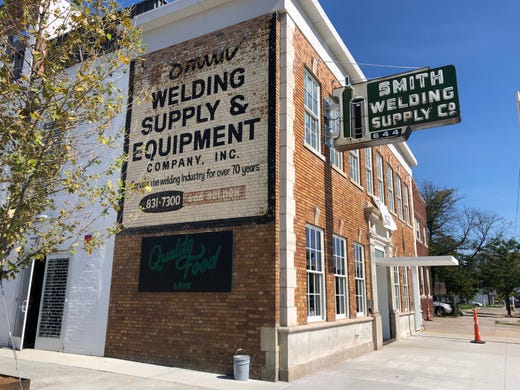 Smith & Co. restaurant is inside a century-old building on Selden that was Smith Welding Supply Co. until 2007. Melody Baetens
Fullscreen 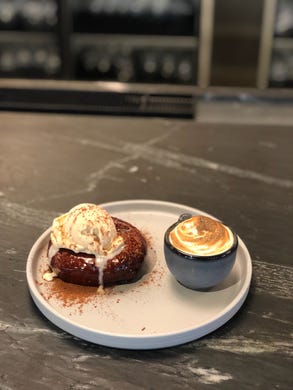 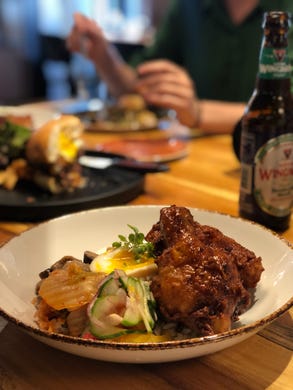 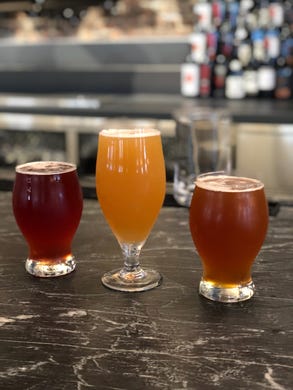 Smith & Co. is the only place to get Nain Rouge Brewery's beers right now. Here is the Detroit Hibiscus Wheat, Confus Guava IPA and the 644 Amber. Melody Baetens
Fullscreen 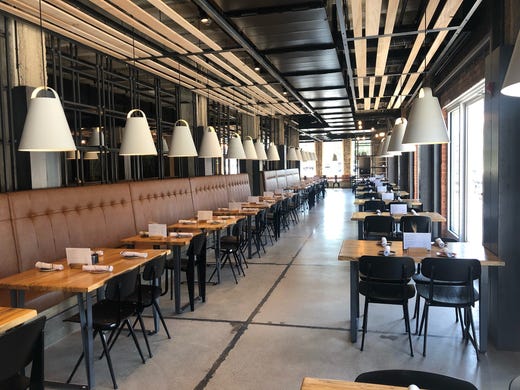 The house-bottled Prom Night Punch at Smith & Co., made with vodka, blackberry, lemon and mint, is $10. Melody Baetens
Fullscreen 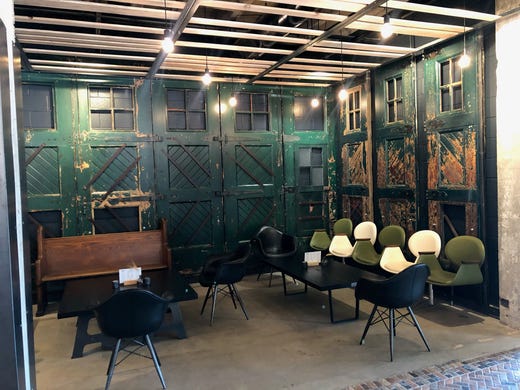 A rustic-chic lounge area next to the bar at Smith & Co. Melody Baetens
Fullscreen

A century-old building in Midtown has been transformed from a welding supply shop to a casual, spacious restaurant with its own brewpub and cuisine influenced by Michigan and Detroit.

Smith & Co. debuts Friday at 4 p.m. and will serve dinner seven days a week and lunch and brunch on the weekends.

A new restaurant opening in Midtown is hardly news these days, but Smith & Co. aims to stand apart from the fray by offering something casual and spacious that speaks to a wide array of customers and stays true to the city.

"We want to stay original do Detroit so we're using a lot of Detroit-esque items in our restaurant," says general manager David Mammel. "We took Smith & Co from the building name itself, we're using a lot of Michigan-based ingredients but turning those into a lot of worldly influenced items."

He says there's a focus on the "pure Detroit" aesthetic and showing off what the Smith Welding Supply & Equipment Company brought to the city with a lot of metal and raw brick. The family-owned company operated in this space for 90 years, up until 2007.

Smith & Co. also stands out because it will be the exclusive server of Nain Rouge Brewery's beers. The microbrewery will open later on with its own tasting room.

Here's everything you need to know about Smith & Co.

Where: 644 Selden, just outside the Cass Corridor in Midtown Detroit. It's a stone's throw from Honest John's and Selden Standard retaurants, and will be adjacent to the forthcoming Barcade arcade and bar.

Who: Chef Greg Antioho comes to Smith & Co. from Ann Arbor's Blue Tractor BBQ & Brewery where he was executive chef. General manager Mammel has worked with other properties in the Mission Restaurant Group such as Jolly Pumpkin Detroit. Smith & Co. is owned by Jon Carlson, Greg Lobdell and Chet Czaplicka. David Hale is brewery operations manager for Nain Rouge Brewery.

Food: Antioho is showcasing Michigan ingredients on an eclectic and globally influenced menu. Small plates include roasted carrots, smoked chicken wings and empanadas that he says will likely soon give away to Michigan pasties. There's a fried chicken sandwich, a braised lamb gyro and a Smith burger made with Sugarbush Farms wagyu beef. Smith & Co. also has a separate menu for vegetarian and vegan guests, a gluten-sensitive menu and four-item list of kid-friendly entrees.

Smith & Co. is the only place to get Nain Rouge Brewery's beers right now. Here is the Detroit Hibiscus Wheat, Confus Guava IPA and the 644 Amber. (Photo: Melody Baetens)

The Look: The spacious dining room seats 160 and a concrete bar in front of modern "Smith & Co." signage seats 19. The 7,000-square-foot restaurant also has lounge seating and a patio in a courtyard that they share with forthcoming Nain Rouge Brewery and Barcade.