Restaurant owners say it offers employees more stability, and increases the quality of service at their business

Restaurant owners say it offers employees more stability, and increases the quality of service at their business

Correction: This story has been updated to reflect the number of patrons Takoi gets each month.

Some Metro Detroit restaurant owners are discouraging their guests from giving tips — the American tradition of doing fuzzy math at the end of a meal to show appreciation for service given.

At the same time, restaurateurs are ensuring employees have a more consistent, livable wage. 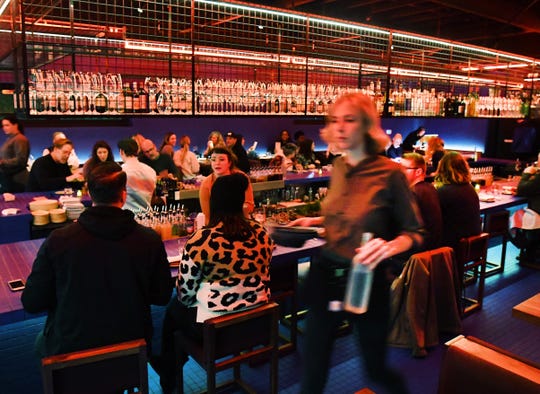 Server Hannah Green works the floor at Magnet, a new restaurant that has done away with the tipping model in Detroit, Michigan on November 6, 2019. (Photo: Daniel Mears, Detroit News)

Restaurants typically pay an hourly wage, but in Michigan an employer can pay a tipped staff member as little as $3.59 an hour with most of a server's or bartender's income coming from tips.

Detroit eateries such as Rose's Fine Foods and Folk are both relatively small, casual operations — with highly rated food. The owners pay their staff more than minimum wage, and any tips that are collected are split among the front and back-of-house staff. At Folk there is an automatic 18% hospitality charge, but at Rose's it's built into the menu price.

In the past two months, two service-forward, finer dining businesses have decided to deviate from the norm as well. They don't expect guests to tip. The owners pay their servers a yearly salary. Menu prices reflect this.

One of these restaurants is Magnet, which opened in Detroit's Core City neighborhood in September. The key players here are Philip Kafka and chef Brad Greenhill, the same as at Corktown's Takoi, a colorful, Thai-influenced nightspot that has received local and national acclaim since opening in 2016.

More: Magnet, a tip-free, vegetable-centric restaurant from the Takoi team, is open

Upon opening, they explained that instead of receiving tips from the customers and an hourly wage, the staff at Magnet will make $35,000-$60,000 per year, depending on skill and experience. They said this will give employees a chance to be more financially secure and have an easier time proving income for loans and other money-related moves.

Kafka said it goes beyond that, though. Of all the things Magnet was touted to be when it opened — cool, modern and largely vegetarian with ambitious cuisine cooked only over open flame — Kaftka says it's the service that he's getting the most positive feedback on.

"The soft data is that everybody raves about our service," he said. "The staff is super happy. Our food is awesome and our space is great, but I get more compliments on our service than anything else, to be honest ... the staff, they feel like they're part of something."

He says guests are "refreshed" by the no-tip policy, too.

Seasoned restaurateur Zharko Palushaj says his regular customers are "unbelievably happy" since he revamped La Strada in Birmingham. He did away with tipping and made some other updates last month at his 4-year-old Italian restaurant.

"For me it's about service," said Palushaj, mirroring what Kafka said. "People think you have to give a tip to get service, it's not true. You travel all over Europe, South America, you go to Mexico, it doesn’t matter, we’re the only country where we do the tipping."

"You can get service there, why not here," he said. Palushaj, who has traveled and cooked in kitchens across Europe, knows his staff is going to deliver because he pays them a very good salary in the starting range of $60,000-$75,000, depending on experience. Beyond that, La Strada offers health benefits after one year of employment and a 401(k) plan. 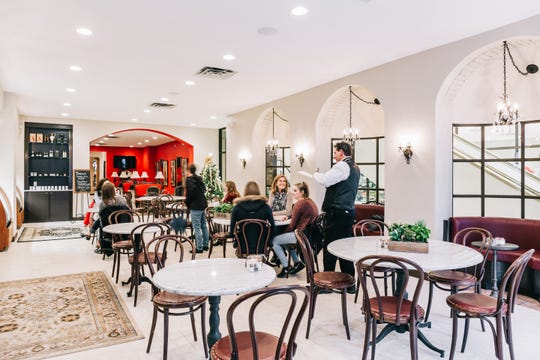 Palushaj didn't hike the menu prices at La Strada 20% so his bottom line would accommodate his 13 employees' salaries, though. This change came as he made other additions to the menu, slowly changing the format from a European cafe to more of a small Italian restaurant.

Palushaj, who helmed Troy's Tre Monti before opening La Strada, says he predicts more restaurants will take on this model within the next five years, especially smaller ones.

"If we really want to be in this industry and we want (servers) to do the best job, I think it's going to happen," he said.

Frequent diner and food event producer Scott Rutterbush, who has been to Magnet twice since it opened in September, also says it all comes down to the quality of the hospitality. He says, as a customer, he doesn’t feel strongly either way about a restaurant's decision to do away with tipping. He says he just wants to see better service and surmises that most customers would agree with him.

“I think it really comes down to execution, if the leadership is able to present that model to their staff and the staff buys in and feels like this is a benefit for them financially, then I think it’s going to result in a better overall experience for the guest,” he said.

“But the opposite could happen, too … if their staff doesn’t buy into it or feels like they’re making less than before, then it’s going to result in, probably, a poorer guest experience.”

He says he doesn’t think the no-tipping model is “a golden key” to unlocking the staffing problems that restaurants face, but it has potential.

“Restaurants are going to have to be sustainable with this model and it has to make sense financially, but I think from the guest’s perspective it’s all about the experience,” he said, stressing the importance of good service. “If the experience improves and gets better, then people are going to be in favor of it.” 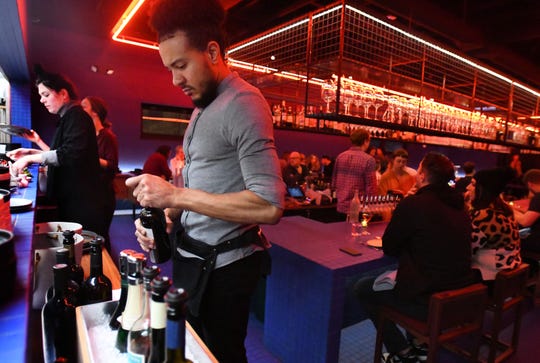 Server Thor Jones opens a bottle of wine for a customer at Magnet, a new restaurant that has done away with the tipping model in Detroit, Michigan on November 6, 2019. (Photo: Daniel Mears, Detroit News)

He said the trips he has made to Magnet have been “fantastic.”

“I think the early returns for them have probably been pretty good,” he said. “I’ve had overall really good experiences there from the food, to the hospitality to the service. They’ve all been excellent.”

Rutterbush, who is part of Dine Drink Detroit, which hosts cocktail events and food festivals in Metro Detroit, said it didn’t feel strange not leaving any gratuity at the end of his meals at Magnet.

“I typically use a credit card … there’s no spot on the credit card slip to leave a tip,” he said. “It didn’t feel awkward in the least bit.”

Palushaj and Kafka both say the no-tipping model is not for every restaurant.

"What everybody comments on about Takoi is how diverse it is and how the clientele ranges from kids in college, to skateboarders to people from the suburbs, people come in and get noodles," said Kafka. "It's going to be hard for us to implement this system there because we have such a diverse clientele."

Kafka says Takoi serves more people than Magnet — about 5,000 per month — but the average bill at Magnet is much higher.

"Some people come in and spend $15 for a beer and a bowl of noodles and some people spend $55 per head for a chef's tasting," he says of Takoi. At Magnet, there is a more wine-centric beverage program, and more is expected from the servers in terms of service and uniforms.

The model isn't for every kind of employee, either. Raven Love, a Detroit-area bartender who has served at hip spots like the Library Bar at the Detroit Club, Willis Show Bar in Midtown and Toasted Oak Grill in Novi, says she understands both sides of this coin, but personally it's not for her.

"I would prefer to be tipped," she said. "I say that with the cognizance that I've been fortunate enough to work in somewhat higher end places, where I could count on larger (checks) and consequently, higher tips."

Love says a salaried pay structure could be "a major win" for someone working at a restaurant chain with lower menu prices. Bottom line, though, is she said it depends on if you want to count on a restaurant or bar owner to pay you, or the general public.

"The odds for success and compassion are much better with the public, in my experience."