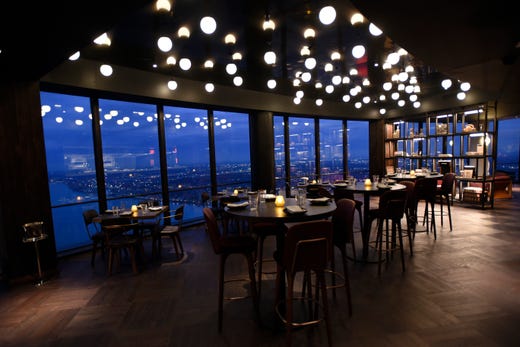 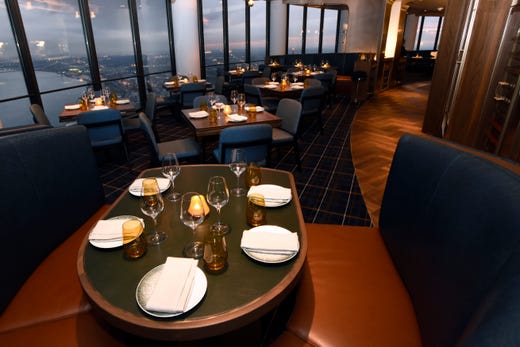 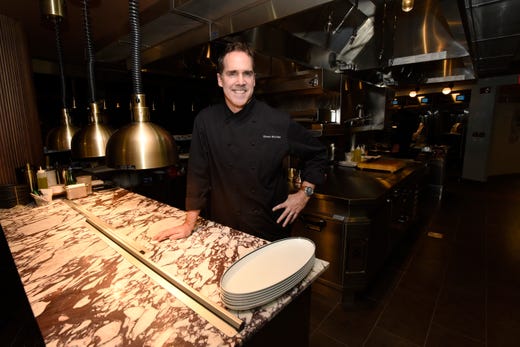 Chef Principal Shawn McClain, photographed in the kitchen of Highlands at the Renaissance Center in Detroit. Jose Juarez, Special to Detroit News
Fullscreen 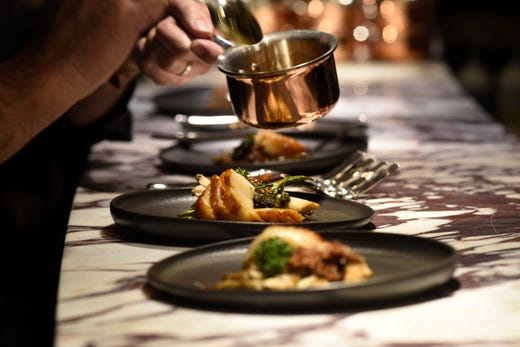 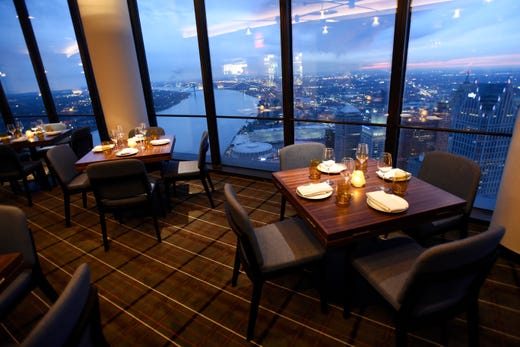 Dining area of Highlands, where diners can overlook the city of Detroit, Canada, and the Ambassador Bridge. Jose Juarez, Special to Detroit News
Fullscreen 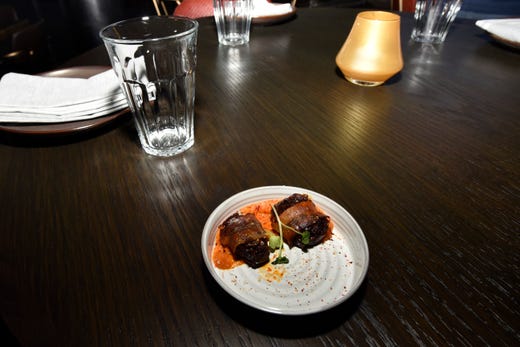 The 71st and 72nd floors of the state's tallest building are home to two restaurants, a bar and a private event space all known as Highlands Detroit

Dining is returning to the top of the tallest building in the state Monday with the Highlands with not one, but four new dining destinations on the 71st and 72nd floors of the GM Renaissance Center.

The anchor is the Highland Steakhouse, which aims to take the tried-and-true American concept and make it a special-occasion restaurant with a dazzling view that still is approachable and straightforward.

It's joined by a Scotch-centric lounge called High Bar, which is the first thing guests will see when stepping out of the glass elevators on floor 71 (your ears may pop on the way up). A whole menu is available, but it's designed for pre- or post-dinner cocktails and small, delicate desserts. 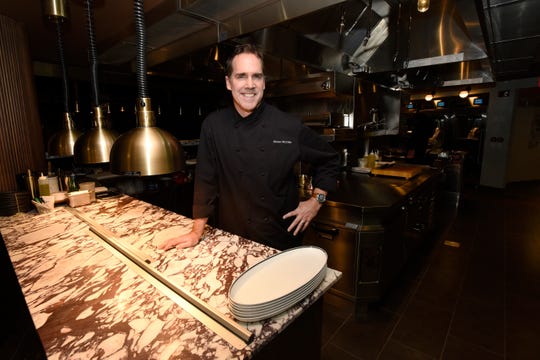 Principal chef Shawn McClain is seen in the kitchen of Highlands, which opens Nov. 25 at the Renaissance Center in Detroit. McClain is a James Beard Award winner. (Photo: Jose Juarez, Special to Detroit News)

On the opposite side of the High Bar from the steakhouse is Hearth 71, a casual restaurant with seasonable, shareable dishes and an open kitchen serving an ever-changing menu highlighting vegetables, roasted meats, dips, cheese and charcuterie.

A renovated 72nd floor will be a private event space with a view from the top of the city's skyline. The vision here is to host everything from business meetings to bar mitzvahs to weddings.

After pushing back the opening date a few times — they were originally hoping for a Nov. 15 debut — the three restaurants are ready to open to the public on Monday.

This is the 72nd floor, which will be used as a private event space. (Photo: Jose Juarez, Special to Detroit News)

Like the previous restaurant in the riverfront space, Coach Insignia, the Highlands will not have a slowly revolving dining floor. The top of the RenCen hasn't had that feature since the original restaurant, the Summit, closed about 20 years ago.

"It was really important for us to turn the space upside down," said chef Shawn McClain of McClain Camarota Hospitality, the restaurant group that was granted the keys to the space after fine dining restaurant Coach Insignia closed in early 2017.

"We didn’t want it to be a sleepy place where you just sat in front of a window and looked outside. We wanted as much action going on inside as there is outside."

They've done that by closing up the floor on 72, which previously overlooked the dining room of Coach Insignia restaurant on 71, McClain said. He also wanted the Highlands Steakhouse and Hearth 71 to have open kitchens.

These are two of four kitchens for the Highlands. There's also a finishing kitchen on 72, where the private events will be held, and a preparation facility on the RenCen's ground floor, where it's easier to accept deliveries.

"There were a lot of infrastructure changes," he said of the 20,000-square-foot, two-level space. "Working 71 and 72 floors above the ground, it just has a lot of challenges … materials, equipment and just getting things up there." 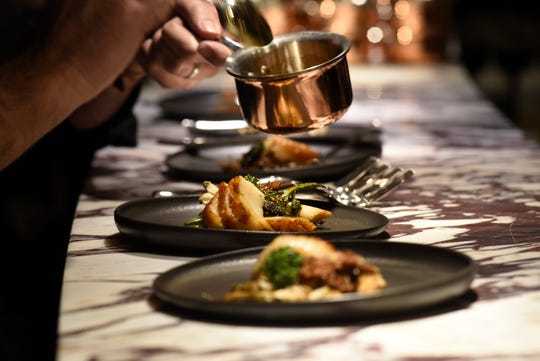 The restaurant group includes McClain and his wife, hospitality director and Michigan native Holly McClain, plus creative director Sarah Camarota and operations director Richard Camarota. Together they have restaurants at the Aria Resort and Casino and Mandalay Bay in Las Vegas.

The McClains have relocated to Metro Detroit. During their time here they've explored the current dining scene, which chef Shawn says is "so inspiring."

"We have an opportunity with the space, with its history, to have a lot of interest and eyes on us and we want to deliver tenfold on those expectations, but at the end of the day, to kind of fit as a natural complement to Detroit’s dining scene, which is growing and has a lot of great things going on right now."

Storage lockers hold bottles that are part of the Whiskey Club, which is set up near the High Bar. (Photo: Jose Juarez, Special to Detroit News)

Sarah Camarota said that any restaurant on the top of a tall building ltends to be for very special occasions, but she also wants locals to feel comfortable coming to the Highlands any time.

There's a focus on wine here with temperature-controlled shelving. Seafood and meat, including some dry-aged cuts, are the stars with signature shared dishes like warm wood roasted shellfish dish ($75) and Japanese Kobe beef ($125). Some more affordable but still luxurious options are the 8-ounce Wagyu flat iron steak ($48) and braised veal cheeks ($39). 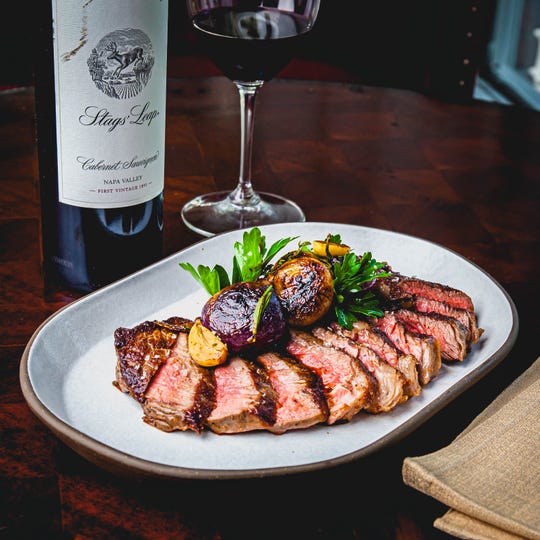 Snake River Falls ribeye steak will be on the menu at the forthcoming Highlands Steakhouse atop the GM Renaissance Center in Detroit. (Photo: The Highlands)

This is high end, but the east side-facing restaurant Hearth 71 is far more casual. This is where they want people to feel comfortable visiting before a game or after work.

"Hearth 71 is more like your really cool younger brother having people over and just making a really exquisite meal out of whatever happens to be in the fridge," Camarota  said, adding that they bought a ton of vinyl singles from Third Man Records to use as clipboards for serving the guest the check.

Only a few reservations per night will be permitted at Hearth 71 because they want to be able to serve walk-ins with a view of Belle Isle. The menu has small plates ($7-$18) like Spanish baked eggs, bacon-wrapped Medjool dates and a cheese board. Make a meal out of a few of those or order a Michigan-inspired entree ($18-$27) like the walleye or slow-roasted lamb. 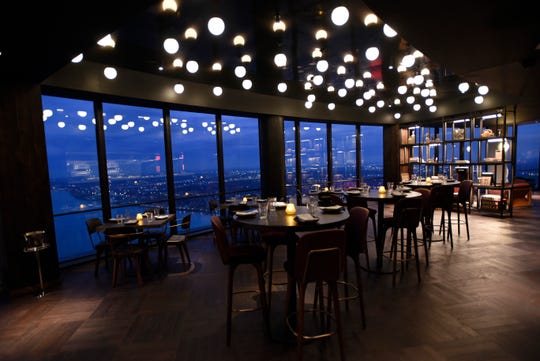 Dining area of Hearth 71, which opens Nov. 25 at the Renaissance Center in Detroit. (Photo: Jose Juarez, Special to Detroit News)

Camarota and McClain declined to discuss dollar amounts for the investment, but they admit that they faced competition to develop it.

"There were a lot of people who wanted to have the opportunity to do something up there," she said. "We started talking to General Motors three years ago and the premise of the conversation ... obviously this is a very iconic space and it’s an important space, not just for the building but for the city."

The High Bar, Highlands Steakhouse and Hearth 71 are accessible from an elevator on Level 3 of the 400 Renaissance Center. At first, the restaurants will be open at 5 p.m. Monday through Saturday, and Sunday hours will start later in December. Visit www.highlandsdetroit.com.

Time line for the top of the Ren Cen

1973: Construction starts on what is billed as "the city within a city"

1977: The first tower opens as the tallest in Michigan, a distinction it still holds today by 100 feet

1977: The Summit restaurant opens on the top three floors.It revolves slowly to give diners a 360-degree, international view of downtown Detroit and Windsor.

1999: Marriott announces plans to redesign the Summit as part of a $500 million update by General Motors

Monday: The Highlands Steakhouse, Hearth 71 and High Bar, as well as a private event space open on the 71st and 72nd floors.