it wasn't all rosy, but 2019 saw a lot of excitement surrounding food in Metro Detroit

It was a tough year for local brewpubs and some restaurants hurting from construction, but it was another flavor- and hype-filled 12 months for those who like to try new dining hot spots and drink hard seltzer.

Here are the highlights and a few dim spots from a year filled with a ton of food news. 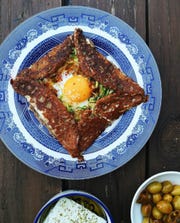 Beautiful bakeries: Perfect pastries, magnificent mille-feuille and fancy financiers were a much-welcome highlight of covering the food beat this year. It all started for me in February with the opening of Cannelle Detroit, bringing a little slice of Paris to Capitol Park. More sugar-fueled bliss was found at Warda Patisserie inside Trinosophes near Eastern Market, blending flavors of North Africa, Europe and Michigan in a stunning way that brought it national acclaim. Detroit's Ochre Bakery in the Core City neighborhood was named one of the 10 best new restaurants in the country by Bon Appétit. Most recently, a Japanese spin on French pastries came to downtown Clawson with the debut of White Wolf Japanese Patisserie, a beautiful and simple space with sandwiches, coffee and loads of gorgeous treats. 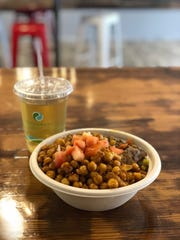 Food truck evolution: Everyone loves a success story, and 2019 saw quite a few food trucks turn into full-on restaurants. The most high-profile might be YumVillage, which opened in early 2019 at 6500 Woodward. Throughout the year we've seen chef Godwin Ihentuge add dinner hours, and team up with Corktown's Batch Brewing Company to serve his food there, too. Also trading in wheels for bricks, was chef Omar Anani who opened Saffron De Twah, Detroit's only Moroccan restaurant. Anani has operated a few food trucks in the past few years, including Twisted Mitten and Qais Truck. Now he's settled at 7636 Gratiot, serving unique and wonderful flavors at affordable prices in a small dining area with lunch and dinner service Tuesday-Saturday plus lunch on Sunday. Popular food truck Buffy's Mexi-Casian Grill opened a brick-and-mortar location recently, serving tacos, enchiladas, party platters and more at 13312 Fort in Southgate.

Lobster mania: The devotion to clawed crustacean started many years ago with Mudgie's annual lobster roll week, which saw more than 2,000 pounds of lobster come through the famed Corktown deli this year. Other restaurants got on board this year, including Hazel, Ravine and Downtown in Birmingham, which launched a lobster and other seafood takeover in August that was so successful they expanded the event by about two weeks, and ended up serving 10,000 guests in the first three weeks. Lobster was also part of one of the most viral photos of the year when a lobster roll-stealing seagull made off with a woman's $21 sandwich in Maine this summer. 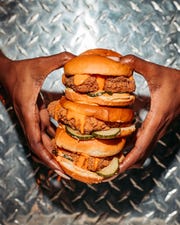 Three juicy fake chicken sandwiches stacked together. Street Beet is selling these and other vegan food for a limited time at 3rd Street Bar in Detroit (Photo: Chris Gerard)

Chicken sandwiches: No sandwich was more hyped this year, though, than the fried chicken sandwich. The nation-wide frenzy over Popeye's chicken sammy saw guns pulled in Texas and fatal stabbings in Maryland. In Michigan, though, it was mostly just long lines for the crispy snack. Locally there was an influx of fried chicken sandwiches on menus around Metro Detroit. Vegan pop-up Street Beet sold thousands of juicy, flavorful fake chicken sandwiches out the back of Third Street bar in Detroit. Fort Street Galley in downtown Detroit added Which Came First, serving a very spicy version of a Nashville hot chicken sandwich. Also downtown, Penny Red's opened near the Shinola Hotel under the wing of nationally known and award-winning chef Andrew Carmelini, selling chicken in honey-drenched sandwiches or by the bucket.

Brewery troubles: The biggest story in Detroit's food scene this year is likely the racial discrimination lawsuit filed against Founders Brewing Co. by a former employee. The suit didn't attract much attention when it was filed at first, but when bizarre comments made by a tap room manager in a deposition made nationwide news in October, all eyes were on the Michigan beer makers. They closed their Detroit tap room, announced plans to reopen in 2020 and promise to donate $2 million in profits over three years to charities. I'm quite sure I wrote more stories about Founders that got more page views than anything else I worked on this year. In less sensational news, Axle Brewing and Livernois Tap in Ferndale closed in June and were later purchased by Eastern Market Brewing Co. Popular craft beverage maker and music venue Cellarmen's in Hazel Park also shuttered, as did longstanding Black Lotus in Clawson.

Hard seltzer pops: Clear, sparkling, low-calorie alcoholic sparking water was unabashedly the beverage of summer 2019 and beyond. National brands scored big, and local beverage-makers followed suit, too, with several versions of flavored hard seltzer of their own. They'll be celebrated Friday at the All Fizzed Up hard seltzer festival at the Royal Oak Music Theatre.

Construction pains: Sadly, businesses in some Detroit neighborhoods this year were plagued with nearby construction. Chef Omar Mitchell from Table No. 2 on the Avenue of Fashion told me he saw business go down about 70% since the work crews came in. I saw a lot of media stories and the city even stepped in with shuttles to help usher customers to businesses. His neighbors at Kuzzo's Chicken & Waffles took the opportunity to temporarily close and renovate. In the Grandmont Rosedale neighborhood, chef Maxcel Hardy's River Bistro shuttered in 2019 partially because of construction issues, he said. Another food business in that area, Town Hall Caffé, took up a successful crowdfunding campaign to help them expand the business to stay afloat.

Openings and closings: River Bistro was one of the most disappointing closings in the area dining scene in 2019, in my opinion. Other big losses include two Eastern Market restaurants: farm-to-table restaurant Gather and longstanding lunch favorite Russell Street Deli, which looks like it will live on in some capacity as a soup company. Not really a loss, but a big deal location-wise, the Hard Rock Cafe in downtown Detroit closed in January and the space is still empty. Clawson in particular saw doors open and close this year with the end of Da Nang and Black Lotus Brewing, a revamp of Noble Fish, a new chef for Three Cats Cafe with Matt Prentice and the debut of the stunning, aforementioned White Wolf Japanese Patisserie. The big openings in Detroit included Mink seafood bar in Corktown, the new downtown Detroit Buddy's Pizza, a second restaurant from the Takoi team called Magnet, Pernoi, a joint effort between two hot chefs (at least at first) and Highlands Detroit, a group of dazzling restaurants on the 71st floor of the GM Renaissance Center.

Dining area of Highlands, which opened Nov. 25 at the Renaissance Center in Detroit. (Photo: Jose Juarez, Special to Detroit News)