Like beer? Got a spare $2,000 laying around? Falling Down Beer Co. has a Black Friday deal for you: Two beers a day for the rest of your life for one price. 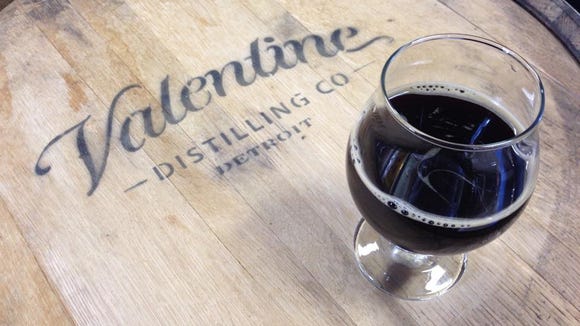 It's just one of the specials the Warren-based brewer is offering for weary shoppers. The other big one: The release of Angry Beaver, an 8% ABV double brown ale and its slightly angrier cousin, a bourbon barrel-aged version that clocks in at 10% ABV.

"It's an English-style brown. It's very malty. It's got a lot of caramel notes," head brewer and co-founder Mark E. Lawson said of the ale. The barrel-aged version, he said, kicks it up via aging in Valentine Distilling (Ferndale) bourbon barrels.

The pair of Angry Beavers will join a lineup of six dark beers occupying most of the brewpub's eight taps for Black Friday. The others: Coffee & Chocolate Stout, Rocky Road Brown Ale, Rye Stout and Smoked Porter. For non-dark drinkers, Mother Cluster Cream Ale and the brewery's standard Ninja Chicken American Pale Ale will also be available. The brewery's chef, Karen Potter, gets in on the action with a blackened shrimp and pepperjack grits special, a black bean burger special, and a blackberry dessert.

"Last year, we weren't prepared for it, but we got a huge rush of people right at 1 p.m. when everybody got done shopping," Larson said. "We weren't staffed for that, but this year we decided to get ready for it and to do more."

The beer-for-life promotion was an idea he picked up from some brewers in Minneapolis, Miami and Texas, where it was used as a startup funding mechanism. Falling Down actually has its origins in an Indiegogo crowdfunding campaign.

Despite the $2,000 price tag, Larson said, customers are already showing interest, drawn by the idea of getting two beers a day for the rest of their lives.

"I've had a bunch of people already calculating out their return on investment," he said of some of his regulars. "I think there are a handful of them that if they take it will make out like bandits."