Clinton Twp. --  Bret Kuhnhenn is looking forward to the extra day in 2016. That's when, after more than two years of work and lots of hurdles, he'll open the popular Michigan brewing company's new 4,000-square-foot taproom. 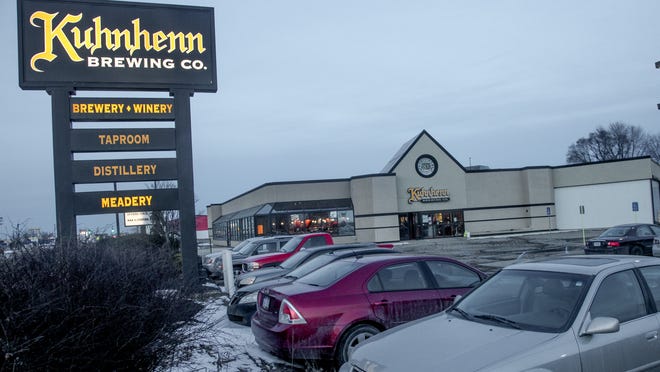 The Feb. 29 leap-day premiere will follow a series of soft-launch events intended to train the staff and shake out any problems, including Thursday night's first preview, attended by local dignitaries, media members and some special customers.

"My gosh, it's been a long time. The project just unfolded and kept going," Kuhnhenn said. The initial project was smaller in scale and didn't anticipate additions for some of the brewing equipment that was too big to fit into the former Evergreen Home and Garden Center at 36000 Groesbeck Highway. Plans had to be adjusted and rooms had to literally be built around the gear. Along they way, they discovered a bad roof that had to be replaced. They hired 60 new employees for the operation.

"It was a big learning process: Adding additions, getting variances, everything takes a lot of time, a lot of money," he said, laughing over one of the craft cocktails made with Kuhnhenn's artisan white whiskey, which will eventually join beers, wines and meads in the 40,000-square-foot production and distribution space adjacent to the taproom.

The taproom itself, equipped with 28 handles, takes some cues from the original Chicago Road location, with tall, heavy wood tables, and a bar area heavy on wood trim, polished stainless steel and mirrors. But it increases that space several times over. Groesbeck has 280 seats in a big L-shaped main area, and many more on a still too-cold-to-use patio area out front. A friend jokes that patrons will have a good view of the Groesbeck Cruise. Bret Kuhnhenn laughs because he knows none exists.

A Warren resident, he spent plenty of time in the area as a child. His grandparents live in a subdivision behind the facility, and he remembers dining with them as a child at a restaurant across the street. While the brewery considered other locations in Oakland County and in a former Shopper's World store in Hamtramck, Kuhnhenn said Groesbeck was an easy choice in the end. They wanted at least 3,000 square feet of space for the taproom. They wanted room for a bottling line. And they didn't want the hassles of limited parking that customers endure at the Warren pub.

"We're just bringing something back to this neighborhood. It needs it, too. What else around here is like it?" he asked.

"We're happy to see this pop up here. It's a great facility," said Michigan State Sen. Steven Bieda, D-Warren, a guest at the preview and a longtime fan of Kuhnhenn's beers and meads (his favorites include the fall pumpkin ale and Loonie Kuhnie Pale Ale). "They've taken a property that's been vacant for a number of years and turned it into something that's going to be a destination bar. It's nice. It's going to draw people from all over."

Kuhnhenn expects a crowd for the opening events -- the grand opening on Feb. 29, and the official ribbon cutting on March 2. Staffers are working out remote parking and shuttle services for visitors. He also expects to have all 28 taps pouring Kuhnhenn beverages. No guest taps are planned and, for the soft-launch events, only a handful of the brewery's standard beers are flowing. But it's a good selection including the DIPA double IPA, and session IPAs Fluffer and Thumper. Also on tap is their Tangerine Wit.

New to Kuhnhenn is a full menu, featuring appetizers like duck fat French fries, a sliced meat tray and a tray of their sausages. Sandwiches include a burger and a venison Italian sausage on a roll with grilled peppers and onions.

"That's a whole new thing for us," Kuhnhenn said. For many years, Chicago Road customers ordered takeout from nearby restaurants, or dined on popcorn from a machine in the corner.

For now, there's no production activity at the Groesbeck facility. Kuhnhenn said that will come later. It's hoped the extra space will allow them to increase capacity and increase allotments of their specialty beers, including the solstice series beers. The large production space was lit for the preview, and contained equipment, but it was obvious there's work to be done before beer is made and bottled there.