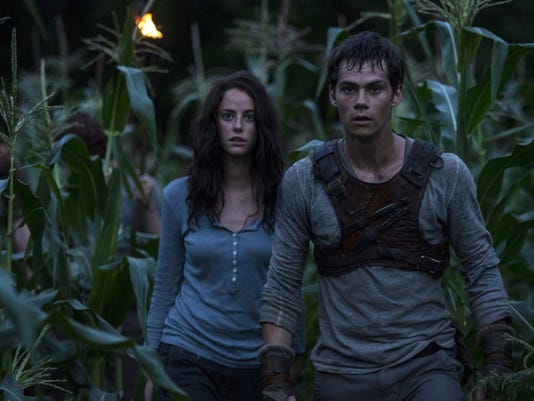 Thomas is deposited in a community of boys after his memory is erased, soon learning they're all trapped in a maze that will require him to join forces with fellow "runners" for a shot at escape. (Photo: Ben Rothstein, Ben Rothstein )

It's a perfect pitch for a reality show: A group of teenage males find themselves locked inside the giant walls of a mysterious compound in "The Maze Runner." What are they doing there? How do they get out? And is there some way to send the Kardashians there?

"The Maze Runner" is the latest dystopian future-set sci-fi young adult property taking a stab at becoming a franchise. It is adapted from James Dashner's 2007 novel, the first entry in a trilogy. But after "The Hunger Games" and "Divergent," the pickings feel slim, and "The Maze Runner" isn't as thrilling as the former or as heady as the latter. At the post-apocalyptic young adult buffet, it's leftovers.

First-time filmmaker Wes Ball, working from a script adapted from the novel, takes his time answering the big questions and focuses on the community inside the walls. Thomas (Dylan O'Brien) is the newbie, who arrives via an elevator where he is greeted, harshly, by the group's leader, Gally (Will Poulter). Thomas, whose memory has been wiped out, quickly learns the ropes: Outside the walls lie a gigantic maze that shifts every night, and only the designated "runners" within the group get to explore it. That maze is policed by "grievers," mechanical spiders culled from the blueprints of "Starship Troopers," the threat of whom keep the society in line.

Thomas wants out, and his initiative disrupts the balance of the community, forcing a power struggle between him and Gally. Meanwhile, the nature of what lies outside the walls slowly, very slowly unfurls, at a pace meant to set up two more movies rather than bring this chapter to a satisfying close.

"The Maze Runner" assumes viewers are in for the long haul, but doesn't try to win them over. Hardcore fans may already be in line for the next installments, but to newbies, this barely feels like a race worth running.

Rated PG-13 for thematic elements and intense sequences of sci-fi violence and action, including some disturbing images