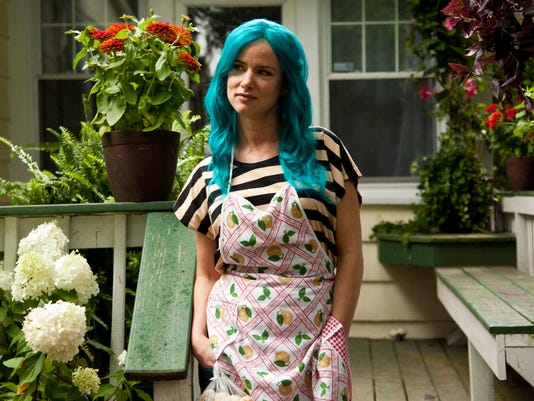 Kelly (Juliette Lewis) is a former punk rock singer who’s settled for suburban life. She’s just moved to a new neighborhood with her husband, Josh (Josh Hopkins), an artist whose succumbed to an advertising job. And she’s just had her first child, Jackson.

Taking to mothering like a fish takes to downhill skiing, Kelly is obviously frustrated with the bawling mess she spends long days with. She has no friends locally — when she tries to reconnect with old pals, they seem like airheads — and the only people she sees are her pushy mother-in-law (Cybil Shepherd) and sister-n-law (Lucy Owen).

So it’s little wonder she’s intrigued when a wheelchair-bound 17-year-old named Cal (Jonny Weston) introduces himself one day. Although she should probably feel a bit more appalled since he immediately compliments her breasts and starts dropping sexual hints.

On the other hand, at least he talks to her. And he seems good to Jackson — in a stretch Kelly hasn’t even heard of swaddling an infant. So a friendship is born.

It’s pretty easy to see where this is going and it’s nowhere good. Because, while Kelly is just looking for some respite from her drab, lonely — Josh works long hours — resigned mommy life, Cal is looking for romantic salvation.

Juliette Lewis is such a unique actress that her strong instincts are often overlooked. She wasn’t cast alongside Meryl Streep in last year’s “August Osage County” by chance — she’s had a way of conveying confused sexuality and romantic tumult since her teen years (“Cape Fear,” “Natural Born Killers,” “From Dusk ’til Dawn”).

But her character here is just a little too naïve, both in terms of sex and parenting, and socially abandoned by her husband. The dark turns to come seem too obvious and inevitable to be believable. Kelly’s heart, and the movie’s, are in the right place, but her head seems a little too empty.