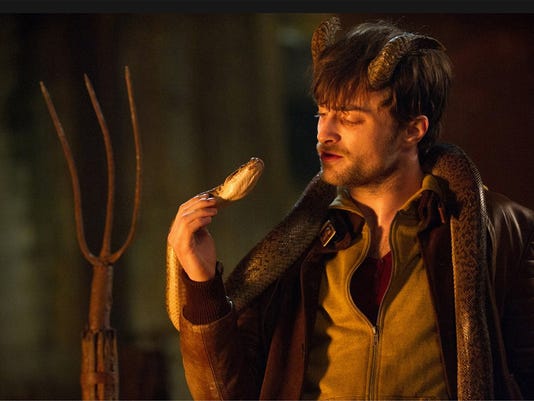 Just in time for Halloween, Harry Potter dresses up as the devil.

Or something like that. “Horns” is one of those gonzo films built on an outrageous premise that show initial promise but then lose their way. What makes little sense to begin with makes no sense at all by the time the movie's over, and all the fun has dissipated.

Daniel Radcliffe stars as Ig Perrish, grieving over the murdered love of his life, Merrin (the always sparkling Juno Temple). His grief is complicated by the fact that everyone in his small town thinks he's the one who bashed her head in near their childhood forest treehouse.

One drunken night, he takes refuge in the arms of another woman (Kelli Garner) and then awakens to find two stubby horns sprouting out of either side of his forehead. Taking this problem to a medical professional, he soon realizes that everyone he encounters now feels compelled to blurt out blunt, usually embarrassing truths.

Now this is one interesting power, and for a bit director Alexandre Aja revels in Ig's encounters with uncomfortable truths (his mother wishes he would just go away, a priest wants him to go hang himself) and we seem to have the makings of a sharp social satire.

But no, in the manner of most supernatural fare, things must keep getting broader. So eventually Ig isn't just hearing truths, he's commanding actions, he's attended by an army of snakes, and then he's somehow invulnerable. There's no explanation as to how or why any of this is happening, it just is.

And so it goes as Ig slowly solves Merrin's murder before the film takes an abruptly gory turn at the end. “Horns” is a good-ideas-gone-wild movie that leaves the best of itself behind.

Rated R for sexual content, some graphic nudity, disturbing violence including a sexual assault, language and drug use