'Gone With the Wind' still captivates

'Gone With the Wind' still captivates 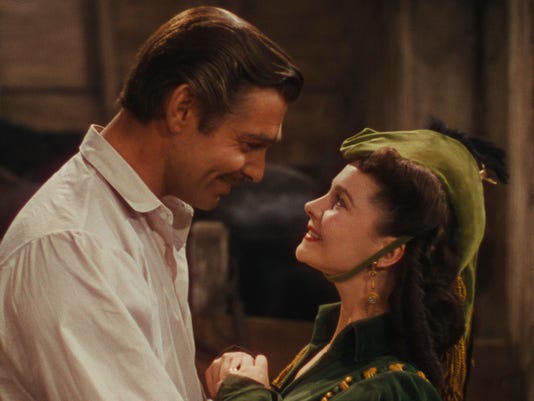 Clark Gable, left, as Rhett Butler, and Vivien Leigh as Scarlett O'Hara in a scene from the film, "Gone With the Wind." The film's 75th anniversary is being celebrated, with special screenings and Warner Bros. Home Entertainment's release of a lavish new limited-edition box set.(Photo: AP)

Audiences still frankly give a damn about the lavish Civil War epic "Gone With the Wind" 75 years after its release.

When adjusted for inflation, the Oscar-winning romance remains the domestic box-office champ with a gross of $1.6 billion. The 220-minute Technicolor film received a record 13 Oscar nominations, winning eight competitive Academy Awards, including best film, actress (Vivien Leigh), supporting actress (Hattie McDaniel) and director (Victor Fleming). With a production cost estimated between $3.85 million and more than $4 million, it was the longest and most expensive Hollywood sound film of the time.

More than 30 million copies of Margaret Mitchell's 1936 Pulitzer Prize-winning novel, on which the film was based, have been sold. The film has been re-released eight times, been a staple on television since the 1970s and a bestseller on video, DVD and now Blu-ray.

Celebrations of the film's diamond anniversary include an exhaustive exhibit at the Harry Ransom Center at the University of Texas, Austin, a new collector's edition Blu-Ray and several books including Life's "Gone With the Wind: The Great American Movie 75 Years Later."

Despite criticism and controversy over the film's racial stereotypes — the slaves in the film are happy, and McDaniel's Mammy is a welcome member of the family and loyal servant — "Gone With the Wind" continues to have a special, if troubling, place in the hearts of American filmgoers.

"The film was and I think continues to be a pop cultural phenomenon," said Richard Jewell, professor at USC's School of Cinematic Art. "It's one of the few movies that lived up to the book."

Long before social media, the buzz surrounding the film version of "GWTW" was astonishing. After independent producer David O. Selznick brought the rights to the book, "GWTW" fans waited on every story coming out of Hollywood about the production, particularly about who would play the willful and beautiful Scarlett O'Hara, the belle of the Tara plantation.

Though such stars as Joan Crawford, Carole Lombard and Katharine Hepburn were among those considered to play Scarlett — about 1,400 actresses were interviewed — Selznick chose British actress Vivien Leigh, who had made a few films, to play the lead role.

Jewell noted the film was brilliantly cast. "Clark Gable was absolutely the right person to play Rhett Butler. Every actress in Hollywood wanted to play Scarlett. The fact that they went with a relatively unknown and she turned out to be the incarnation of Scarlett. It's like a baseball team when one day every one gets a hit.

"It's a testament to the old studio system where producers were the most important factor in most cases. Selznick kept that film together. It was Selznick's vision more than Victor Fleming's. To me he is one of the greatest producers of all time."

But as Missy Schwartz, editor of the Life "GWTW" book and a senior editor at Entertainment Weekly, pointed out, "you can't watch it without 21st century eyes. You have to address race. It's problematic, there is no question. It is just not the reality (of slavery)."

The conversation about "GWTW's" treatment of slavery, race and a benign antebellum South was particularly heated over the last year with the release of 2013 best picture Oscar winner "12 Years a Slave," which depicted the brutality of slavery.

Todd Boyd, professor of critical studies at USC's School of Cinematic Arts, told The Times this year that "the entirety of the history of African Americans in Hollywood has been problematic, and I think in some ways still is. A lot of people looked at those movies as sort of an authentic representation of what African Americans were like."

Jim Crow laws were in full force in the South 75 years ago. McDaniel and the other black cast members couldn't attend the premiere in Atlanta on Dec. 15, 1939. Gable had threatened to boycott the premiere but was persuaded by McDaniel to attend. The Life book reveals that during production, Gable had also protested when he learned there were segregated toilets on one of the sets, promising not to return if they were still there the next day. They weren't.

African Americans protested the film when it opened in major cities. Black playwright Carlton Moss stated in the Daily Worker found Mammy's love for the white family "that has helped to keep her people enchained forever" particularly reprehensible.

Jewell noted that a lot of films from the Golden Age of Hollywood make one "uncomfortable" because of depictions of race and other issues. "But they need to be screened and talked about, as a way to measure the kind of attitudes that existed at that point, which was 75 years after the end of the Civil War. These kind of stereotypical depictions of black people need to be put in a historical context so people will have a better appreciation of how far we have come."

TCM host and film historian Robert Osborne believes "GWTW" has endured because of its emotional resonance.

"It's about survival," he said. "It hit the world in the '30s when Europe was going to war and just before we went into the war. Also, everybody has had somebody in their life that they loved more than they loved them back.

"I think the brilliant thing about the story is that there are little samplings of every part of us in it. It doesn't matter if it was set during the Civil War. It's a relevant movie about emotions."

Here are events, books and collector's items linked to the 75th anniversary of "Gone With the Wind."

"The Making of Gone with the Wind": The exhibition at the Harry Ransom Center at the University of Texas, Austin, features about 300 rare items culled from the center's David O. Selznick Collection, including the recently restored "green" dress worn by Scarlett O'Hara and other gowns designed by Walter Plunkett. The exhibition continues through Jan. 4

"The Making of Gone with the Wind": A lavishly illustrated companion book to the exhibition edited by curator Steve Wilson.

"Gone with the Wind" 75th Anniversary Collector's Edition Blu-ray: This limited and numbered Blu-ray set features the restored film and such extras as a music-box paperweight.

"Gone with the Wind": 75 Years Later: The editors of Life magazine look at the making of the film with essays and an interview with Olivia de Havilland, the only surviving star.

"The Scarlett Letters: The Making of Gone With The Wind": John Wiley's book uses Mitchell's collection of 1939 letters to provide an insider's view of the production.