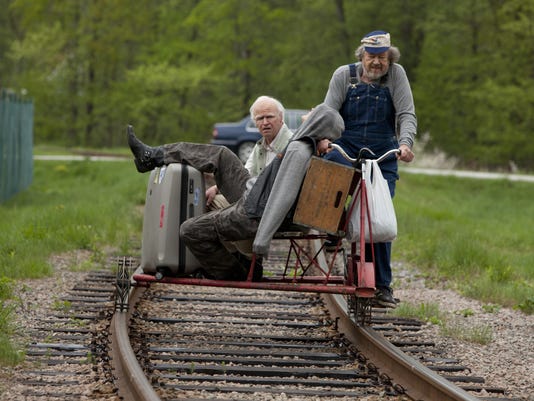 A movie with the title “The 100-Year-Old Man Who Climbed Out the Window and Disappeared” had better be marvelously goofy and whimsical. You don’t give a tragedy or a romance a name like that.

Thankfully, “The 100-Year-Old-Man” more than lives up to its moniker. A sort of Swedish “Forrest Gump”/“Zelig” hybrid, this is a fearlessly comic parade of unlikely incidents and kooky characters, assembled by writer-director Felix Herngren and based on a novel by Jonas Jonasson, and fueled by a marvelously blank performance by star Robert Gustafsson.

Gustafsson plays Allan Karlsson, a young orphan drawn to explosives. So drawn, in fact, that he ends up spending his teen years in a mental hospital. Once released, he drifts to Spain, where he blows things up for revolutionaries battling the dictator Francisco Franco in the ’30s. He mistakenly saves Franco’s life and then moves on to America, where he becomes involved in The Manhattan Project, proving instrumental in building the biggest bomb in history.

We find all this out in flashbacks as Karlsson is having a modern-day adventure. On his 100th birthday, he does indeed climb out of a retirement home window and disappear. He wanders to a bus station and buys a ticket to a backwater, absent-mindedly grabbing a bag belonging to a tattooed motorcycle gang member. When he arrives in the middle of nowhere, he knocks on the only door around and meets another codger, Julius (Iwar Wiklander).

They drink, they eat, they discover the bag Karlsson grabbed contains $50 million euros. The motorcycle gang member is unsuccessful at reclaiming the money, so Karlsson and Julius set out on an impromptu road trip, with the remaining motorcycle gang in pursuit.

Meanwhile the flashbacks keep coming. Karlsson gets drunk with Harry S. Truman, then drunk again in Russia with Stalin. He’s sent to a gulag, where he befriends Albert Einstein’s idiot twin brother, Herbert. He later becomes a double agent for the CIA and KGB, and is key in bringing down the Berlin Wall.

The bouncing back and forth between Karlsson’s absurd memories and his current escapades — somehow he ends up on the run with an elephant — keeps the energy up, and an abundance of delightful touches (a revolutionary who talks nonstop, a hammer dropped from a skyscraper, an aging student who has studied everything, but completed no degree) keep the smiles coming. “The 100-Year-Old-Man” is wonderfully inventive, silly fun.

Rated R for language and some violence