As anticipation for ‘The Force Awakens’ builds, Metro Detroit fans say their appreciation started when they were kids

On Thursday, Jason Gibner, a stay-at-home dad and artist, will go to a 7 p.m. showing of “Star Wars: The Force Awakens.”

After the movie is over, he will turn around and go to a 10:30 p.m. screening of the movie. Then he’ll get up Friday morning to see the movie for a third time at 9:30 a.m.

“Right now I like to think I’m in a kind of zen state, like meditating before going into battle,” said Gibner, 39, of Milan.

“I saw the first one, I think when I was 3 years old. It’s been pretty much non-stop since then. I can’t remember not loving ‘Star Wars’ in my life. It’s just always been there.”

He’s hardly alone. “Star Wars” has been a major, if not the major, pop culture phenomenon for the past five decades, as fandom has been passed down from generation to generation and the spiritual concept of The Force has been integrated into common consciousness.

Now, after a decade-long hiatus, the franchise is returning with a mix of familiar stars from the original three episodes and exciting new characters. Fans should not be disappointed. Star Wars review: The Force is back, baby

No one knows how big the new movie will be. But it will inevitably be huge. Many Thursday night shows in Metro Detroit are sold out, and advance ticket sales have prompted opening weekend box office estimates ranging from $170 million to as high as $240 million across the country.

“It has a shot at being the biggest opening weekend of all time,” says Gitesh Pandya, editor of boxofficeguru.com, which would have it topping this summer’s haul of nearly $209 million for “Jurassic World.”

“Because of holiday distractions and so on, historically movies do not open huge in December. However, I think all of that gets thrown out the window with ‘Star Wars.’”

Pandya said interest in the movie will last a long time. “Theaters are going to block out as many auditoriums as possible and as many show times as possible to absorb all the demand.”

The source of that demand is both obvious and integrated into the “Star Wars” franchise. For one thing, the intergalactic series filled with fantastical creatures, personable robots and high-drama heroes and heroines offers escape.

Cliff Walker, who commonly goes by Skighwalker (a play on the “Star Wars” name Skywalker), recalled falling into the “Star Wars” world when he was a small child and the movie was played in summer school or camp.

“I’m from Pontiac, and I grew up in not necessarily a great part of Pontiac, so for me, in my mind, to take a break from what’s going on in the real world and engulf myself in the nuances of the ‘Star Wars’ universe was something great,” says Walker, 27, an editor at the online entertainment magazine Ill Roots.

Walker will be at the first showing of “The Force Awakens” on Thursday night. Also going on opening night will be Jason Nummer of Macomb, who works in advertising. He’ll be going with his dad, who took him to see his first “Star Wars” movie in 1980, when he was 3. 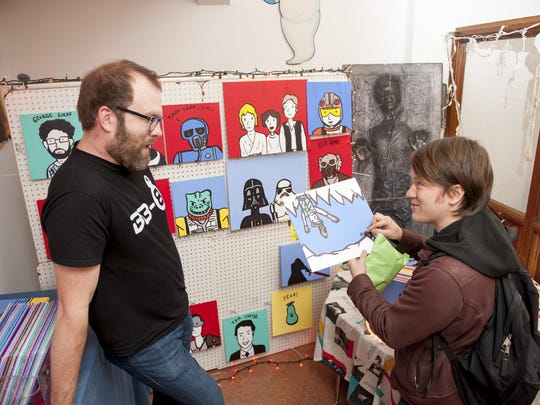 Jason Gibner talks to John Fossum at the DIYpsi market in Ypsilanti on Sunday. Gibner plans to see the movie three times this week. (Photo: David Guralnick / The Detroit News)

“I pretty much know no life without ‘Star Wars’,” he said. For Nummer, “Star Wars” has clearly been the passing of a generational cultural torch.

“For me, it was definitely my Dad; it was something we bonded over as I was growing up. To see his enthusiasm about those movies, he’d come home every week with new toys for us. It was just contagious,” said Nummer, 37.

“It’s really easy to get a kid going on ‘Star Wars,’ because the enthusiasm that emanates from parents and grandparents is remarkable,” says Mike Bernacchi, a professor of marketing at University of Detroit Mercy. “It’s like a religion and they want to pass it on.”

Bernacchi sees the new “Star Wars” film having gigantic potential for merchandising, since it’s coming out a week before Christmas. “There are some predictions on the merchandise that go into the neighborhood of $5 billion,” he said.

Jerry Herron, an American Studies professor at Wayne State University, said the concept of generational interaction is part of “Star Wars” itself.

And indeed, without giving away any spoilers, “The Force Awakens” is also very much about familial dissonance and generations yearning to reunite.

One other thing that sets “Star Wars” apart from all other franchises is its spiritual center, the belief in The Force.

“(Spirituality) is the bond, the glue, no doubt about it,” Bernacchi said. “Nowhere else is there a spiritual aspect to (franchise) movies. That’s why the conversation will continue forever.”

The Force, and its potential for either good or evil, is also at the forefront of the new film. And it’s the fuzziness of what exactly The Force is that makes it so universally appealing.

“It’s a kind of spiritual film without enough detail to turn people away,” Herron said. “If you put too many spiritual details in a film you start to find places where people diverge in their opinion.

“The Force is so beautifully vague and therefore eminently believable by a wide range of people whose opinions are potentially quite different,” he says.

That wide range of people will surely be lining up to see “The Force Awakens” for weeks to come. And they will surely line up for the next two chapters in the series as well as planned spin-offs. The Force, vague though it may be, has proved itself powerful time and again. And Hollywood will want to capitalize on it for as long as possible.

“They’ll keep making them until they run it into the ground,” said boxofficeguru’s Pandya. “Then they’ll probably stop, wait 10 years and do it all over again. This could go on for many more decades to come.”

Plus assorted licensing and merchandise