Movie review: Calamity after calamity in rough ‘The Revenant’

Movie review: Calamity after calamity in rough ‘The Revenant’ 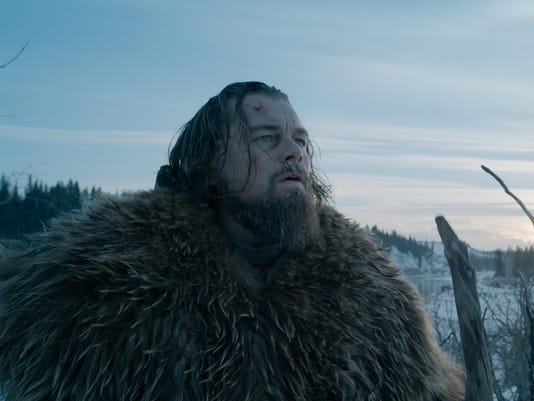 Leonardo DiCaprio plays Hugh Glass, a scout for a trapping expedition sent out to the wilds in 1820s northern America in “The Revenant.”(Photo: Photos by Twentieth Century Fox)

“The Revenant” is big in every way.

It features a big performance from Leonardo DiCaprio that will likely win him his first Oscar. It’s set in a huge, seemingly endless snowy wilderness. And it runs more than 2 1/2 hours. Beyond that, it’s comprised of big moments upon big moments.

All of which means, while it’s a rich film, it’s also something of an endurance test. Every time you think nothing worse could happen to poor Leo, something worse happens. Talk about not being able to catch a break.

DiCaprio plays Hugh Glass, scout for a trapping expedition sent out to the wilds in 1820s northern America. Glass is accompanied by his half-Indian son, Hawk (Forrest Goodluck), and they are out hunting when a swarm of Indians attack the trappers, who are under the command of young officer Andrew Henry (Domnhall Gleeson).

Glass and Hawk hurry back and join in the melee, which leaves dozens of the trappers dead. The survivors race to a boat and take off downriver, fully aware that the Indians can watch them from the shores and attack when the river narrows. The Indians, it turns out, are looking for the chief’s daughter, who was taken in the night by white guys — but not these white guys. Unfortunately, the Indians don’t know that.

Glass convinces Henry that their safest bet is to get off the boat and hike across land, even though winter is settling in. The trappers do just that and Glass goes off to scout the area. He comes upon a mother bear and her cubs and, before he knows it, the mother is upon him.

This is easily the greatest bear-mauling in film history. The bear shreds Glass and tosses him about like a rag doll. Then she takes a break to check out the kids only to come back for more, time and again. Luckily this gives Glass the opportunity to reach for his rifle, and then his knife. Eventually the bear is done, but Glass is grievously injured head to toe.

The trappers find him and build a stretcher to carry him. But Glass can’t speak and seems sure to die. Eventually one particularly disgruntled trapper, Fitzgerald (Tom Hardy, gritty as dirt), suggests they leave him behind to die. Henry won’t agree to that, but he will leave a few men to care for Glass and then assumably bury him. Fitzgerald volunteers for the duty, waits a while, performs some dastardly deeds, and then leaves Glass behind to die.

But Glass doesn’t die. He lingers in the snow. And then he moves, painfully. And, unarmed, he begins a long, long journey battling man and nature, encountering calamity after calamity, with two things in mind: Surviving and killing Fitzgerald.

Inarritu gets a bit too caught up in symbolic dreams and memories — he’s directing with a capital D — but the long slog Glass endures is undeniably strong stuff and the beaten-down but never conquered Glass is near unrecognizable as the baby-faced movie star DiCaprio’s been for so long.

“The Revenant” is both draining and rewarding, and its power lingers long after its last gasp.