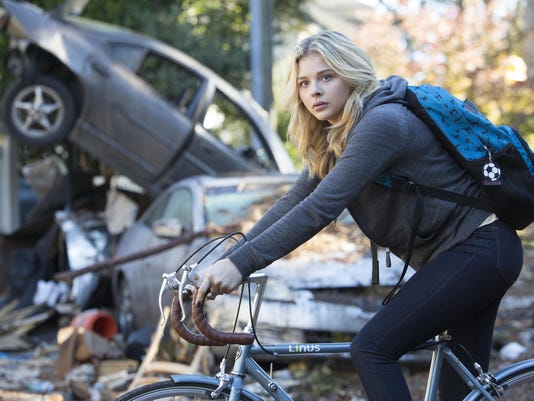 And it’s not easy launching a post-apocalyptic teenager franchise these days, either. Look at “The 5th Wave.” After “The Hunger Games,” “Divergent” and “The Maze Runner” series have jammed multiplexes in recent years, “The 5th Wave,” indeed, feels like the fifth wave of book-to-screen adaptations of end-of-the-world stories aimed at young adults.

And “The 5th Wave” — based on Rick Yancey’s novels — is definitely warmed-over material, cobbled together from the pieces of those previously mentioned sagas. Add in a little inter-species romance, a la “Twilight,” and “The 5th Wave” has all the makings of a genre parody, if only it had that much of a sense of humor about itself.

It stars Chloe Grace Moretz as Cassie Sullivan, a self-described “totally normal high school girl” who’s biggest problem is the crush she harbors on Ben Parish (“The Kings of Summer’s” Nick Robinson). But when an alien spacecraft starts hovering in the sky above her Ohio hometown, things get real.

These “galactic party crashers” initiate a series of events, or “waves,” to annihilate humankind, beginning with an electromagnetic pulse that wipes out the world’s power. Next up are the floods, triggered by a string of tidal waves that destroy the world’s coastal cities (and true to disaster movie form, we get to see them take out important world landmarks; bye bye, London’s Tower Bridge).

So far, so good, and director J Blakeson stages these early scenes with the right mix of terror and uncertainty. Next up on the aliens’ hit list is a modified bird flu, which is followed by the invasion of the aliens who, conveniently, take the form of humans. Around this time the military shows up, led by Colonel Vosch (Liev Schreiber). He enlists an army of teenagers to take out the aliens, which is around the time “The 5th Wave” sinks like a stone.

As the storyline toggles between Cassie’s quest for survival and the army plot, the teenage schmaltz bubbles over the top. After getting shot in the leg on an abandoned highway, Cassie is taken in by Evan Walker (Alex Roe), a hunk in a Henley shirt who nurses her back to health. Meanwhile, Cassie’s baby brother, Sam (Zackary Arthur), is training to be a soldier in a squadron that includes Ben (now known as “Zombie”) and “Ringer” (a raven-haired Maika Monroe, unrecognizable from “The Guest” and “It Follows”), a no-nonsense feminist warrior who chides her fellow cadets, “no demeaning sexist remarks!”

Meanwhile, the end of the world is merely a backdrop for Cassie to make goo-goo eyes at Evan, and a scene where she catches him bathing in a lake is straight out of the teen movie playbook. Human extinction is no match for teenage hormones, it seems.

And as Sam remembers the good times on Earth by reciting Coldplay ballads, “The 5th Wave” falls further into camp territory. A climactic race to rescue Sam from the clutches of alien forces takes a backseat to an introduction of a love triangle between Cassie, Evan and Ben. Later, this admission from Ben: “I was named after Ben & Jerry’s. Nothing made my dad happier than ice cream.”

And so it is. “The 5th Wave” starts off strong, but winds up drowning in young adult cliches. It’s not the end of the world, but it’s starting to feel like the end of this genre.