Movie review: Life is a mobile game in pulse-racing ‘Nerve’

Movie review: Life is a mobile game in pulse-racing ‘Nerve’ 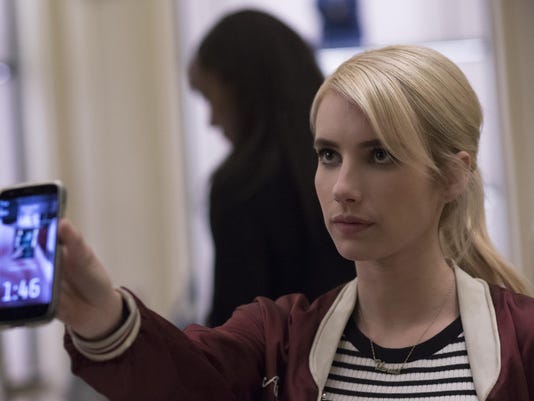 Emma Roberts stars as Vee, a high school senior who is caught up in a new game that endangers her life in “Nerve.”(Photo: Niko Tavernise / Lionsgate)

The timing is disarmingly perfect for “Nerve,” the sparkplug little techno thriller about a mobile gaming craze gone wild.

It centers on a game that glues players to their phones and sends them darting around their city, heads down toward their screens (all while it helps itself to all of your online info), which is pretty much exactly what “Pokémon Go” has done since it launched this month. There are aspects of instant online celebrity turning a normal person’s life upside down in a matter of clicks, which Chewbacca Mom would be happy to tell you about. And it touches on the culpability and cowardice of online anonymity, which rears its ugly head regularly, but recently hit a tipping point in the “Ghostbusters” brouhaha.

All of which is to say “Nerve” doesn’t seem so far off from where we are, and if we’re not careful, by next year it could serve as a tame reminder of more innocent times.

Emma Roberts plays Vee, a high school senior (Juliettte Lewis is her mom) on Staten Island who is shy and meek compared to her outgoing bestie, Sydney (Emily Meade). Vee learns of a new mobile game called “Nerve,” explained as “truth or dare, without the truth,” which is all the rage with the kids. (Syd is a top player, naturally.) Players log on and complete dares to win money — kiss a stranger, sing a song in the middle of a diner — and as the dares escalate, so do the rewards, and so do the number of “watchers” tuning in to follow along.

Vee teams up with Ian (Dave Franco), a fellow “Nerve” player, and they gain quite the following, as couples within the “Nerve” universe go. But as the stakes increase, their lives are endangered, and “Nerve” turns out to be more than just fun and games.

Directed with kinetic on-the-ground energy by Henry Joost and Ariel Schulman, the duo who also nailed a particular sect of online behavior in “Catfish,” “Nerve” pulsates with a fresh sense of fun and adventure. Screens are shot from inside and outside and technology is inventively integrated into the film’s vision of New York City, which is bathed in glowing neon hues.

“Nerve” is sharp looking and delivers real jolts, even if the climax pushes things a bit far and wraps up too easily. Or maybe it’s an accurate look at what’ll happen when “Nerve” becomes real? We’ll probably know for sure sooner than we think.