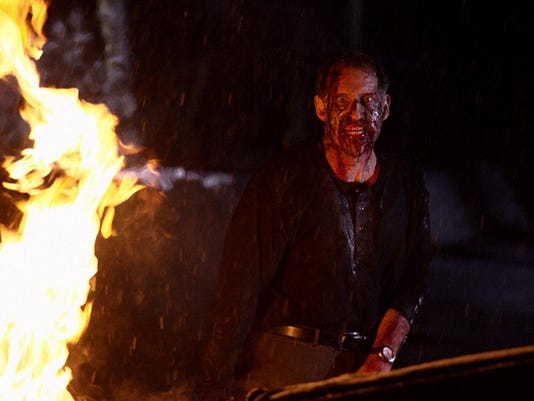 That’s about the only message delivered by “The Mind’s Eye,” a film that never says anything about the mind having an eye. The acting is abysmal, the script is sheer corn, and the progression is from sci fi to outright gore. But heads explode, so there’s that.

This is a film about people with telekinetic abilities — they can move things around using their minds. We first meet loner Zack Connors (Graham Skipper, who might have been a tad more relatable without a Charles Manson beard) walking down a snowy country road. Cops pull him over for no reason and begin hassling him. Suddenly he grimaces and the police car’s windows explode while a cop goes flying.

Inexplicably, though, the cops subdue him. At which point Zack is turned over to a Mad Scientist named Dr. Michael Slovak (John Speredakos). Turns out the good-actually-bad doctor has an institute where he’s studying people with telekinetic abilities. And Zack’s long-lost telekinetic girlfriend, Rachel (Lauren Ashley Carter), is there.

How? Why? When did they get separated? Don’t ask. Doesn’t matter. She’s there.

Zack hangs out at the institute for three months, taking injections that lessen his abilities. Again, why? Don’t ask. And he’s not even allowed to see Rachel. Because the Mad Scientist is secretly draining her spinal fluid and injecting it into himself to become Super Mad Scientist Telekinesis Guy.

Eventually Zack loses his patience, breaks Rachel out, and the bloodletting begins.

And some serious acting challenges ensue. Skipper, as Zack, has to repeatedly stare at things like a deranged, bearded Harry Potter with bug eyes screaming “Aaahhhhh!” until a flying ax splits a skull or a body just goes blooey. There might be Oscar talk.

If so, it will be short. In the history of cheap gore films, “The Mind’s Eye” is just another blip on the bloody screen.