The actress was apparently beloved by all in the cast, both for who she was and what the character of Leia meant to them 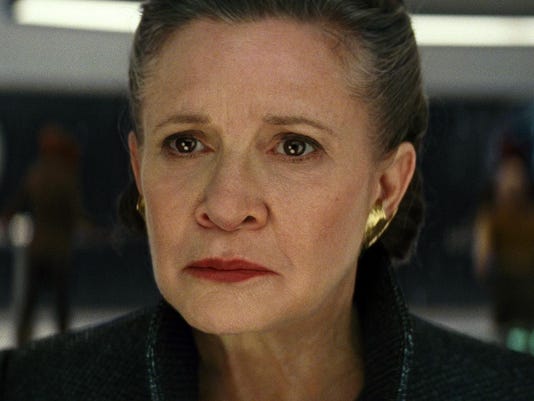 Carrie Fisher in her final appearance as General Leia in “The Last Jedi.”(Photo: AP)

Los Angeles -- Carrie Fisher may have been the “madcap Auntie Mame” to Mark Hamill’s “square” homebody, but despite their differences, the “Star Wars” siblings got along famously right till the end.

While both skyrocketed to celebrity with their “Star Wars” roles in 1977 and remained inextricably linked through their on-screen family, Hamill says he missed a lot of Fisher’s life — during “the Bryan Lourd years” and when her daughter Billie Lourd was an infant. That’s why, even before her untimely death last year, he felt especially grateful to just get to spend time with his friend during the filming of “Star Wars: The Last Jedi.”

“I’d see her periodically during charity events or when there were ‘Star Wars’ celebrations and so forth. But this was the first time where we could really hang and enjoy each other. Even if I wasn’t shooting I was coming in for stunt training and this or that, hair tests, coming into her trailer and hanging out with her and (her dog) Gary,” Hamill said. “There was a comfort level we’d developed over all these years. She knew me. She knew I hadn’t really changed. She knew I wasn’t out to get something.”

Fisher was apparently beloved by all in the cast, both for who she was and what the character of Leia meant to them. Her death at age 60 came after filming had finished and deep into post-production, but it presented a bit of a conundrum for the filmmakers who had anticipated Leia being part of the next film, too.

“The Last Jedi” writer-director Rian Johnson said he ultimately didn’t end up changing anything about her role in this installment, which is the eighth in the “Star Wars” films about the lives and adventures of the Skywalker clan. That’ll be something J.J. Abrams will have to grapple with in Episode IX, in which Fisher was meant to have a much more prominent role.

“We’ll have to find a way to give her closure in IX, but we’ll never be able to replace her,” Hamill said.

Although no one can talk about exactly what Leia’s arc entails in “The Last Jedi,” out Tuesday, Johnson expects it will be an emotional experience.

“She is so good in it,” Johnson said. “I always think about the fans who didn’t know her in real life and grew up watching her and it’s like they’re all going through their own type of loss. It’s really going to be emotional for people who she means something to see this. I hope it’ll be good. I hope it’ll mean something to them.”

Many in the cast speak almost interchangeably about the feisty princess turned general and the unapologetic boldness of Hollywood royalty who embodied her. The women in particular recall being deeply affected by the Leia character when they were young.

“I truly remember thinking ‘She’s different. She’s not like all the rest,’ ” Gwendoline Christie said of seeing Leia for the first time when she was 6 or 7 years old. “I’m thinking, ‘I want to be like her.’ ”

But it was Fisher’s extraordinary persona that was top of mind of everyone.

Actress Kelly Marie Tran on Carrie Fisher: “She was so unapologetic and openly herself.... What an example. I am so fortunate to have met her.” (Photo: West Ian / TNS)

“It’s hard to do it justice, describing the life of someone. She’s so complicated,” said Adam Driver, who plays her estranged son. “It is always exciting to see someone who is not interested in conforming to any way of how you should behave. And I think she embodied that with a really great sense of irony.”

Fisher made newcomer Kelly Marie Tran realize, “How much courage it takes to be yourself when you’re on a public platform.”

“She was so unapologetic and openly herself,” Tran said. “She will always be an icon as Leia but also as Carrie. What an example. I am so fortunate to have met her.”

But Fisher’s famed frankness and spirit was only one part of a complex person, said Hamill, who, after 40 years of knowing her got to see the nuance.

“As tough as she was and as venomous as her wit could be, she was really vulnerable in a way. Even though we weren’t really brother and sister there was sort of a protectiveness I felt. I was defensive when people would criticize her and I’d get mad at her when she was self-indulgent, which was quite a lot. But I loved her so much,” he said.

“When I get mad and selfish and think, ‘Darn-it Carrie, your timing used to be perfect, why now?’ You have to say, ‘At least we have that. We should be grateful for the time we had with her.’ And I do know one thing: She would want us to be laughing and happy, not morose and depressed over her not being around anymore.”