John Boyega picks up the slack, but can only do so much for this retread of the 2013 original 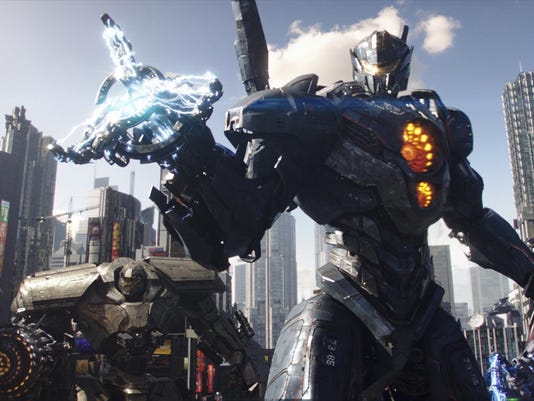 A scene from “Pacific Rim Uprising,” which returns to the world of giant fighting robots.(Photo: Legendary Pictures / Universal Pictures)

“Pacific Rim Uprising” returns to the world of giant fightin’ robots that was introduced in 2013’s “Pacific Rim.” That earlier film was director Guillermo del Toro’s mash-up of “Top Gun” and “Godzilla,” a spirited celebration of monster and military movie clichés. This sequel continues inside the same basic framework, with less inventive moxie and a more workmanlike attitude.

It does boast a charming performance from John Boyega, who does his best to carry the project on his shoulders. Reunited with his native British accent, Boyega displays a natural charisma he hasn’t had since his screen debut in “Attack the Block,” and which has been lacking in his role as Finn in the “Star Wars” movies. This is the Boyega we want: cocky, confident and cool. If only the rest of “Pacific Rim Uprising” was on his level.

Boyega plays Jake Pentecost, the son of the excellently named Stacker Pentecost, who was played by Idris Elba in the first film. Elba’s character died in the first movie, a shame, because the world needs an Elba-Boyega father-son project, like, yesterday. Hollywood, you have your homework assignment.

“Uprising” opens 10 years after the actions of “Pacific Rim,” as carcasses of the giant monsters — they’re called Kaiju — litter the landscape like dinosaur bones. The world is still picking up the pieces from the great battle, and the economy has been flipped on its ear; in the streets, people are trading cars for cases of Sriracha sauce. It’s the wild West. Jake is a hustler whose knowledge of the giant Kaiju-fighting robots — they’re called Jaegers, try to keep up — allows him to sell decommissioned parts for scrap.

He meets Amara (newcomer Cailee Spaeny in a spunky performance), a rebellious teen who has built her own Jaeger out of spare parts. It’s illegal to build your own Jaeger and take it out for a spin around town, but her proficiency in controlling the huge hunk of metal gets the attention of the Jaeger program, and she’s recruited for training now that suspicious global activity has necessitated the return of the robot fighting force.

In the program, Amara clashes with the other cadets (Scott Eastwood plays a captain), while Jake — even though he insists “I am not my father” — pretty much follows in his pops’ footsteps. And “Uprising” largely follows in “Pacific Rim’s” footsteps, offering up more gargantuan battles between monsters and robots — sorry, Kaiju and Jaegers — that leave entire cities smashed in their wake. And if you’re feeling a bit of déjà vu from this, you’re not the only one.

“Uprising” has an international cast and trots the globe, bouncing around from Los Angeles to Sydney to Siberia to Tokyo. That should do plenty to shore up its worldwide box office cumes, which is where its priorities lie. It’s engineered to play to as big an audience as possible, and the language of destruction is universal. (It’s also why this traditional summer offering is opening in March; between last week’s “Tomb Raider” and next week’s “Ready Player One,” summer is now officially the year-round box office setting.)

Though it was far from perfect, the first “Pacific Rim” offered up an air of wink-wink fun for audiences to be in on. “Uprising” — which is directed by first-time filmmaker Steven S. DeKnight — relies on the leftover mood and atmosphere established in the first movie.

By the time its villain is revealed (it’s an eye-roller) and the climactic battle sequence hits, there’s not much left to hold onto. Like leftovers in the fridge or reuniting with a lost love, “Pacific Rim: Uprising” is proof things are never as good the second time around.

Rated PG-13 for sequences of sci-fi violence and action, and some language