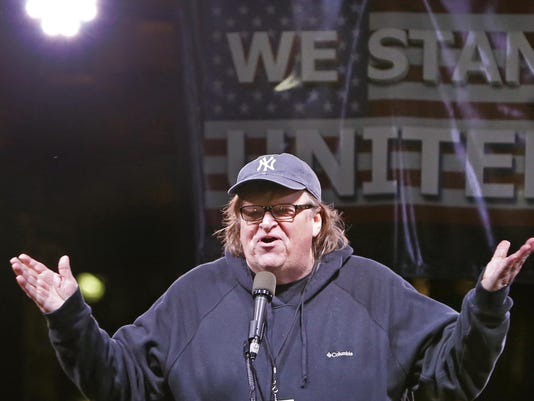 Filmmaker Michael Moore speaks to thousands of people at an anti-Trump protest in front of the Trump International Hotel in New York on Jan. 19, 2017.(Photo: Kathy Willens / AP, file)

The Michigan filmmaker announced the movie's release date during a Thursday appearance on "The Late Show With Stephen Colbert."

The film's title is a play off of Moore's 2004 George W. Bush documentary, "Fahrenheit 9/11," flipped to reflect the day in 2016 that Trump was named president.

"This is about how the hell we got in this situation, and how we’re going to get out of it," Moore told Colbert.

Moore, wearing blue jeans, a black T-shirt underneath a brown jacket and a Detroit Tigers cap, introduced a clip from the film that showed him pulling up to Trump's Mar-a-Lago resort and greeting a guard. "I was in there for 11 and a half minutes," Moore said. When Colbert asked if he was thrown out, Moore answered, "they're not able to do that with me."

The Oscar winner said the film was still being edited and that he couldn't reveal many details about its content.

Meanwhile, Moore addressed recent events in the news and said it's time for liberals to get involved. "When are people going to get off of the couch? When are we going to rise up?" he said. "The only way we’re going to stop this is, eventually, we’re all going to have to put our bodies on the line."