'Sorry to Bother You' is Boots Riley's biggest coup

The rapper turns filmmaker with his outrageous debut film, a wild comedy about race, labor unions and climbing the corporate ladder

'Sorry to Bother You' is Boots Riley's biggest coup

The rapper turns filmmaker with his outrageous debut film, a wild comedy about race, labor unions and climbing the corporate ladder

Boots Riley on the set of "Sorry to Bother You."(Photo: Annapurna Pictures)

Over the six years Boots Riley spent trying to get "Sorry to Bother You" made, he dug himself into a hole where the only way out was making the movie.

"I just kept going further and further to where there was no turning back," says the director, whose riotous debut film opens in Metro Detroit theaters on Friday. "I had worked myself to a level where there was no going back. I can't responsibly recommend that to anyone, that's just what I did."

The go-hard spirit can be felt in the film, an anarchic comedy about a telemarketer ("Atlanta's" Lakeith Stanfield) who climbs the corporate ladder and uncovers, well, a plot that's too wild to give away.

Riley himself is a firm believer in keeping those plot elements close to the chest for as long as possible.

"This is a film where the surprise comes from not knowing what's around the corner," he says during a phone interview last week following a screening of the film in Chicago.

Riley, a musician known for his work with politically charged Bay Area rap outfit the Coup and the rap-rock group Street Sweeper Social Club, found that crossing over into the film world presented its challenges but also came with advantages.

He’d built a lot of relationships and goodwill during his music career, and in 20-plus years of being an independent musician, he’d learned how to kick down doors, pester people when needed and get things done.

“If you’re a musician, no one (in the film world) takes what you’re doing seriously,” says the 47-year-old. “On the other hand, if I were to say I’m going to build a boat, but I’ve never built anything before, people might say, ‘let’s wait and see what that boat looks like.’ But if I’d built a house, and I can use those same resources, people might say, ‘well, he’s built a house, so he’s got some tenacity, he probably knows how to make things happen.’” 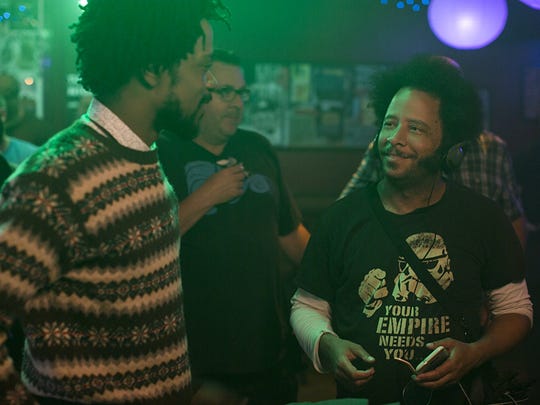 Lakeith Stanfield (left) and Boots Riley (right) on the set of "Sorry to Bother You." (Photo: Annapurna Pictures)

In 2012 he released an album with the Coup titled “Sorry to Bother You” to build buzz around the screenplay, which he wrote the year prior.

He toyed with turning the story into a comic book or a radio play, and then briefly considered selling the screenplay and letting someone else direct it. But that didn't fit into his long-term plan.

"That would have just made me a writer," Riley says, "and it would have been hard to get someone to trust me as a director after that."

“That would have just made me a writer,” Riley says, “and it would have been hard to get someone to trust me as a director after that.”

He courted interest from comedian Patton Oswalt, who agreed to provide voice work for the film and allowed his name to be attached to the project.

And then in 2014 Riley ran into author and publisher Dave Eggers on the street in San Francisco, passed him a copy of his screenplay and asked him for notes.

Eggers did him one better: He agreed to publish the screenplay in McSweeney’s, his quarterly literary journal, as well as in its own paperback.

That got the ball rolling and drummed up interest in “Sorry to Bother You,” and from there Riley was accepted into a series of programs through the Sundance Film Festival — the Screenwriters Lab, the Catalyst program and the Directors Lab — that helped him gain clout and get in touch with investors.

When Stanfield signed on, financing was secured, and Riley started shooting in June 2017.

All the while, Riley had put touring on hold, to the point where his fee fell so low that hitting the road would no longer be financially viable.

“I had worked myself to the level where there was no turning back,” he says. “What else could I do?”

Ties to the Motor City

Born Raymond Riley, the artist’s hustle was reared in California’s Bay Area, where he spent time as a UPS worker before starting the Coup in 1991. But it stretches back to his early days in Detroit, where he lived on the city’s west side from ages 1 to 6.

Riley still has family in Detroit, and he named “Sorry to Bother You’s” lead female character, played by Tessa Thompson, after the city.

Detroit fits into Riley’s worldview because of its tumultuous history with racial strife, the rise of the auto industry giving birth to labor unions and its rich musical heritage.

“So much of the stories and contradictions of life in the United States and American history are right there in Detroit,” Riley says.

“Sorry to Bother You” takes on a lot — issues of race, the value of art, the importance of organizing, the greed of corporations, the exploitation of labor, the dangers of ingesting near-fatal levels of cocaine — and it does it with a surreal comic spirit and a screwball, wildly inventive visual sensibility.

Riley says he hopes viewers take so much away from it that it demands a conversation, but most of all, he wants audiences to leave with a sense of optimism.

“Although things are (messed) up, there are ways to leverage power,” he says. “There’s a fight that is to be had, but as long as a fight is going on, there’s hope.”

'Sorry to Bother You'