Triplets are reunited at age 19; but why were they separated? 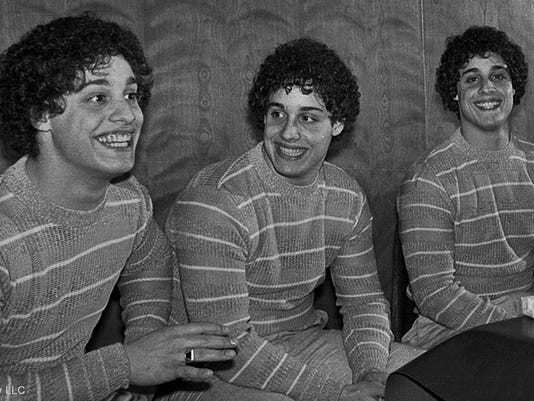 It all starts out so sunny. And turns so dark.

In 1980, a freshman named Bobby Shafran arrived at an upstate New York community college. While seeking out his new dorm room, he found people waving at him, slapping him on the back, girls even coming up and full-on kissing him.

He didn't know any of them.

He got to his room and an excited guy came by to explain the situation. It turned out Bobby looked exactly like a guy who'd been popular on campus the previous year, Eddy Galland. It also turned out Eddy and Bobby shared the same birthday. And they'd both been adopted.

Twins separated at birth had found each other. Amazing story. The papers ran with it, featuring a photo of the two.

Which is how David Kellman found out he was a triplet — he looked just like them, had the same birthday, etc. Astonished, he contacted the other two. Suddenly the three brothers were not only the best of friends, they were the toast of New York and an international media sensation.

They did all the big talk shows. And they wowed audiences without even trying. The tended to sit, walk move and talk the same. They'd all wrestled in high school. They all smoked Marlboros. They had the same favorite color. To pump it up they all wore the same outfits.

But wait. What monster decided to split up triplets (and, as it later came out, twins as well). And for what purpose? Was somebody pulling the strings here?

As it turns out, the answer is an emphatic and nefarious yes.

"Three Identical Strangers" looks at the bizarre experiment behind the adoptions while also slowly peeling back the dark consequences it had for the adopted kids. It also zooms in on the nature versus nurture question that has entranced, irritated and boggled humans for centuries.

Ultimately there are no clear answers, thanks to human interference and the limits of our understanding. One thing is clear though. As a relative of one of the triplets says, "When you play with humans, you do something very wrong."