Review: 'Crazy Rich Asians' is a wealth of fun

Line up for the summer's most fun romantic comedy

Review: 'Crazy Rich Asians' is a wealth of fun

Line up for the summer's most fun romantic comedy 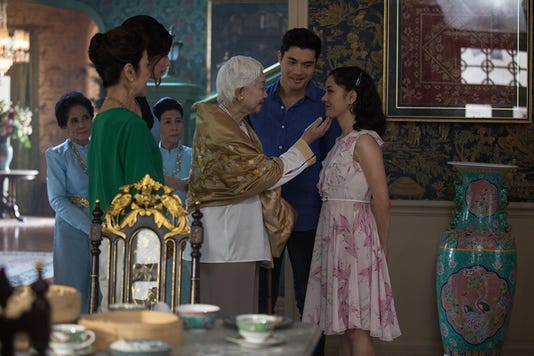 A bit "Pretty Woman," a bit "My Big Fat (Chinese) Wedding" and a whole lot of giddy, bubbly fun, "Crazy Rich Asians" is a dizzying delight and the rom-com party to beat this summer.

Crazy as it sounds, this utter charmer from director Jon M. Chu, the pop-minded director behind the "Step Up" sequels and Justin Bieber's tour documentary, is the first Hollywood production to feature an all-Asian cast since "The Joy Luck Club" in 1993.

It introduces a huge group of characters and immerses viewers in a world of obscenely lavish wealth. But it does so in a way that isn't at all overbearing, and by the end, you'll feel like you're a part of the family.

"Fresh Off the Boat's" Constance Wu is Rachel, an economics professor in New York who doesn't know her boyfriend Nick (the ridiculously charming Henry Golding) is part of one of Singapore's wealthiest families.

Her first clue comes when, on their way to Nick's friend's wedding back in Singapore, they receive beyond first class treatment, and are taken to a bedroom inside the airplane. It's only a small taste of Nick's family's affluence and influence, as she's basically brought in to meet China's royal family.

Because Nick is an eligible bachelor from one of China's most powerful families, there is immediate scrutiny of Rachel; an early scene depicts a social network learning of Rachel's existence all at once, and is one of the most fluent real-world visual representations of the internet at work that the movies have given us to date.

"Crazy Rich Asians," which is based on Kevin Kwan's 2013 novel, follows a classic romantic comedy formula but never feels like it's adhering to convention. Its world is so bright and Chu's direction is so visually appealing that it provides an intoxicating rush that makes it feel fresh.

The soundtrack is full of Asian covers of American pop songs (Madonna's "Material Girl," Coldplay's "Yellow"), which is part of the movie's familiar-yet-different world building. A wedding scene is poised to become an all-timer for filmed weddings -- sales of bridal water shoes could skyrocket in the movie's wake -- and the film's finale wraps the story up with a big, bright bow.

"Crazy Rich Asians" doesn't set out to make a big statement about inclusion, it simply tells an endearing story in an exceptional way. And in so doing, it shows how great stories cross barriers and wind up enriching the world around us.