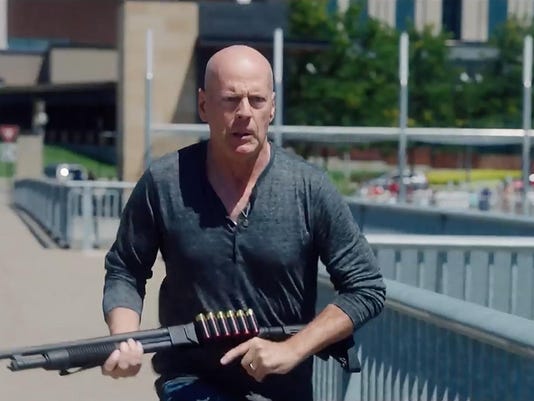 Bruce Willis is a retired cop out to find a bank robber in “Reprisal.”(Photo: Lionsgate Premiere)

Bruce Willis is stuck in a movie melancholy. The man who once ruled the box office with a “Die Hard” approach to films has fallen into a funk with his starring roles. You have to be a fan of B-grade action offerings or a Willis maniac to recall such recent projects as “First Kill,” “Marauders,” “Vice” and “The Prince.” The only real hit in that run, “Split,” featured Willis in an uncredited role.

The slog down dreary acting lane continues with “Reprisal,” an action movie that features a sleepwalking effort by Willis. To be fair, with the script by novice writer Bryce Hammons and execution of “Reprisal” by director Brian A. Miller (who also was responsible for “Vice” and “The Prince”), the only place to go was down.

It starts on a rather mundane level with Jacob (Frank Grillo), a bank officer who is struggling with his own finances while trying to take care of his diabetic daughter. His problems almost come to an end when a violent masked robber, Gabriel (Johnathon Schaech), hits Jacob’s bank. He’s left alive, but can’t shake the thought there was more he could do.

With the help of his retired police officer neighbor, James (Willis), Jacob begins to piece together the clues to track down the robber. It doesn’t matter that a major investigative task force has not been able to crack the case. All they had were real detectives, analysts and millions of dollars of equipment. What they needed was someone whose understanding of the prime rate and savings accounts makes them a modern Sherlock Holmes.

Through it all, Willis looks like he’s late to cash his check. He mumbles a few lines during the big brainstorming session to track down the thief, but the rest of the film is spent sitting at a kitchen table, in an ambulance or in a car. He gets up just enough energy to be in on the finale. And, his bullying of the local and federal cops goes beyond ludicrous to embarrassing for all parties.

Schaech gets the most out of what little’s given. It is a dark role for the “That Thing You Do!” star, and he steps up to the challenge. It was just not challenging enough. The best thing that can be said is he did get more to do than former Miss USA Olivia Culpo as Jacob’s wife.

All of this goes to add another reason for Willis to be glum in regards to his acting career. There was a time when his casting was a promise of high energy fun and excitement. Now, it is a huge clue that the film is little more than a direct-to-video production.