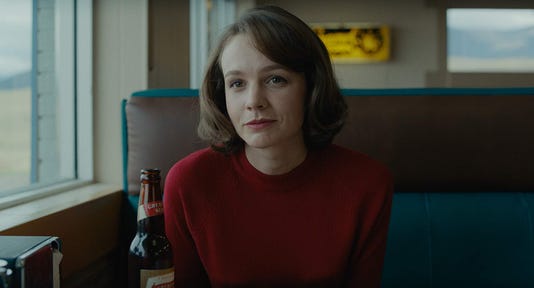 Carey Mulligan gives a shattering performance in "Wildlife" as a woman who is left reeling by her circumstances and doesn't know how to play the role of mother or wife, much less herself.

It's a quiet, smoldering portrayal in a film that similarly bubbles underneath the surface, always threatening to blow its top. It never does, an act of restraint on the part of Paul Dano, the actor who marks his directorial debut with this understated domestic drama (Dano also co-wrote the screenplay, along with his partner Zoe Kazan, basing it on Richard Ford's 1990 novel.)

Jerry loses his job at the local country club and takes a job fighting wildfires in the nearby mountains for $1 an hour, effectively abandoning his family.

A different fire is raging on the home front, as Jeanette — feeling overwhelmed and alone — starts to unravel. She overshares with her son: "We haven't been intimate lately," she tells Joe of her relationship with his father. "You're old enough now to know that." (He's not, of course.)

Later, she drags her son along with her on a date with an older man. "I feel like I need to wake up," she confesses to her son. "But I don't know what from, or to."

"Wildlife" is told through young Joe's eyes, and we feel his sense of confusion as he watches his mother emotionally derail. It's a story of its time, unfolding pre-women's lib, and Jeanette feels an inner frustration she can't even give voice to. But as "Wildlife" quietly rages, Mulligan lets it be felt.