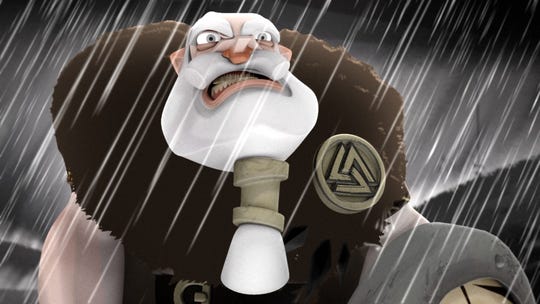 In "The Saga of Bjorn," a viking struggles to reach Valhalla (Photo: Courtesy of Spike & Mike's Sick and Twisted Festival of Animation)

An evening of squirm-inducing and gut-busting creative animated shorts returns to the Magic Bag with the annual Spike & Mike's Sick and Twisted Festival of Animation.

A favorite since 1992, the collection of brief cartoons will show three times this month at the Ferndale venue to an 18-and-older audience. This year's program runs just under 90 minutes and includes more than two dozen clips that run just a few minutes each.

The longest clip is a returning "Captain Awesome," clocking in at eight minutes. Another long-ish feature is "The Saga of Bjorn," a 7-minute fantasy cartoon from Denmark about an aging viking who struggles to reach Valhalla.

Founded by Spike Decker and Mike Gribble (the latter of whom died several years ago), the festival was a part of the early careers of animation mega stars like Mike Judge ("Beavis & Butthead") and Matt Stone and Trey Parker who went on to create "South Park."