Review: Moss a knockout in sizzling 'Her Smell'

Review: Moss a knockout in sizzling 'Her Smell' 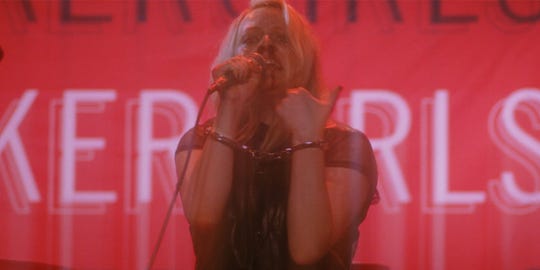 Elisabeth Moss is as dangerously explosive as a downed power line dancing in the street and shooting off sparks in "Her Smell," in which she plays a deeply troubled rock and roller in the '90s alternative rock scene.

Moss is Becky Something, lead singer of Something She, and she plays like the unholy sister spirit of Courtney Love at her most unhinged.

Moss taps into the romance, beauty, restlessness and tragedy of the artistic soul, oftentimes all at once. It's one of the purest, most frighteningly honest portrayals of rock stardom and fame ever captured on film.

Writer-director Alex Ross Perry sets up a world where Becky is the dysfunctional center, and band mates, managers, family members and fans orbit her like satellites. Those who've been around her are exhausted by her antics, those new to her world will be sucked in by her charisma but will quickly grow weary. "We all rely on her for something," sighs "Dirtbag" Danny (Dan Stevens), the father of their young daughter.

"Her Smell" unfolds in a series of long vignettes, depicting Becky inside a series of environments: in a tumultuous backstage scene after a show, deep in the recesses of a lost recording session, in her home far away from the spotlight, and back inside the toxic machine getting ready for a comeback gig.

Perry and Moss — helped along by Keegan DeWitt's sludgy, gurgling score, which is as uneasy as an upset stomach — paint a mood of fear, dread, loneliness and isolation, all within the wild ups and downs of a rock and roll hurricane. You won't forget it. You can't forget it.

Rated R: for language throughout and some drug use