Review: 'See You Yesterday' has eyes on today

Review: 'See You Yesterday' has eyes on today 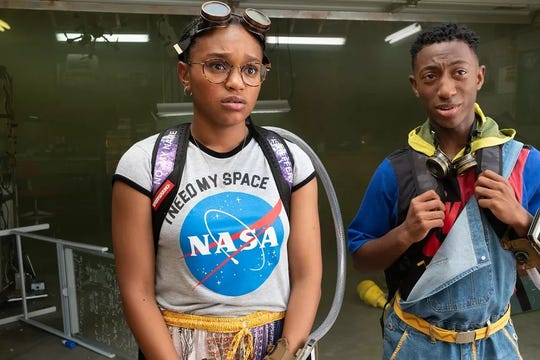 The concept of time travel is framed within the context of Black Lives Matter and the inner-city experience in "See You Yesterday," a sharp teenage sci-fi tale that plays like "The Hate U Give" by way of "Back to the Future."

Eden Duncan-Smith is CJ, a high schooler who is trying to navigate the science of time travel with her friend, Sebastian (Dante Crichlow). They've discovered a way to travel back in time one day, for 10 minutes, but they find out the hard way that messing with the time-space continuum has its consequences.

During their trip back to the previous day, they mess with friends and generally geek out over their triumph. But when CJ's brother, Calvin (actor-rapper Astro) falls victim to a cop's bullet in part because of their shenanigans, their efforts to undo the mess they've made only lead to further complications.

Co-written and directed by Stefon Bristol and based on his own 2017 short, "See You Yesterday" grounds itself in the reality of East Flatbush, Brooklyn while playing in the confines of the genre in which it's based (Michael J. Fox makes a fun cameo). The teenagers speak with authentic voices, and Bristol builds a believable world for them (they conduct their science experiments inside Sebastian's grandmother's garage) without bogging them down in science.

The film has a charmingly lo-fi look and feel; C.J. and Sebastian's time travel gear is essentially made up of backpacks, plastic tubing and wrist holsters for their iPhones. That's because the film only uses time travel as a device to tell a bigger story about what's happening now, in the present.