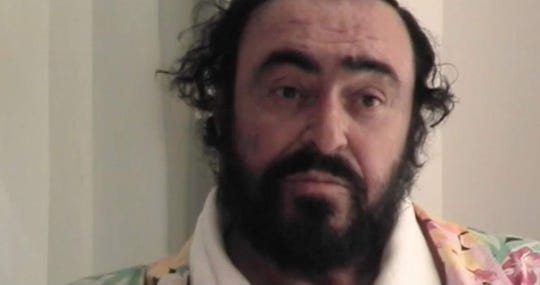 Luciano Pavarotti had a voice that was bigger than life and an outsize personality to match, as evidenced by "Pavarotti," Ron Howard's at times rousing documentary on the big man.

Howard chooses to celebrate Pavarotti and his evolution into an opera rock star and glosses over some of the thornier aspects of his legacy. It's not a warts-and-all telling, more like a few warts before the inevitable standing ovation at the end.

Pavarotti was born in northern Italy in the mid-1930s, and was taught to sing by his father, an amateur singer who never sought out a career in music. He was gifted at an early age, and we see his knockout performances in the early 1960s, where he hits the high C notes that would come to be his trademark.

Pavarotti ultimately left the opera behind as he came to America and became a stadium attraction, touring with Plácido Domingo and José Carreras as the Three Tenors. His cavorting with pop stars showed just how far he strayed from his roots; nothing against the Spice Girls, but surely they had no business sharing a stage with Pavarotti.

Pavarotti had a huge appetite, both for life and for pasta. He was a diva, he hated being alone and he treated performances like death sentences, yet he also had childlike sense of humor and a big heart for charity. He married early and had three children right away, and later strayed from his marriage in a high profile affair that was splashed across the tabloids. "Pavarotti" paints a simple picture of a complicated man, but it hits the high notes: the performances, the cheers, the adulation. Consider it a greatest hits.