Kumail Nanjiani and Dave Bautista shouldn't make a good pair, but they do in this offbeat buddy comedy

Kumail Nanjiani and Dave Bautista shouldn't make a good pair, but they do in this offbeat buddy comedy 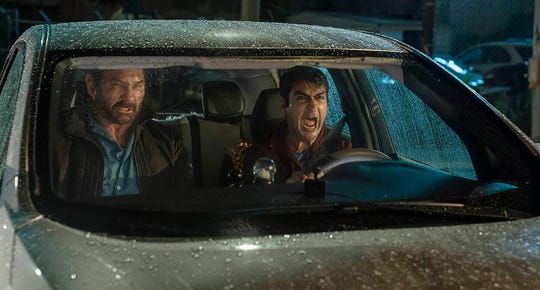 Stu drives an Uber. Hence, "Stuber." If you're looking for more sophistication in your comedy, you may want to look elsewhere.

But "Stuber" works, more or less, thanks to the oddball chemistry of Kumail Nanjiani and Dave Bautista.

Nanjiani has a cautious, nervous Nellie energy that is in direct opposition to the brute force of former pro wrestler Bautista, and the mixed match pairing makes for a surprisingly strong tag team. "Stuber" lives or dies on their charisma, and it mostly comes out on top.

Nanjiani ("The Big Sick") is Stu, a hopeless sporting goods store employee who gets picked on by his boss and is afraid to tell his crush he has feelings for her. He's a decent guy who's not looking to in any way rock the boat.

To help make ends meet — and to raise capital for the spin gym he's co-financing with the girl he won't make a move on — Stu, in his spare time, drives an Uber. (The rideshare service is mentioned by name so many times the movie is basically an ad for the company.)

Bautista is Vic, an uber-tough guy cop on the trail of the gangster who killed his partner.

He's also got bad eyesight. So after getting Lasik surgery — and this is where the plot starts to rely a little too heavily on circumstance — Vic crashes his car and is forced to call an Uber to take him on police business, and he gets Stu.

Stu, who's had a handful of bad reviews in the past, needs to keep his rating above four stars or risk being kicked off of the platform. So Stu drives Vic around for way longer than any rational person would, while Vic holds a lousy review over his head.

The script by Tripper Clancy could use some tightening. There are simply way too many chances for Stu to leave Vic behind, and Vic has no reason to hang onto Stu as a driver, other than the movie needs them to stay together in order to exist. (That's not a great reason.)

But brush that aside — or temporarily disable the nagging "logic" portion of your brain — and Vic and Stu have a good push-pull, opposites attract relationship, which carries "Stuber" over and above the narrative speed bumps that might bring a lesser vehicle to a halt.

Mira Sorvino — yes, the Academy Award winner — shows up as Vic's boss, and Natalie Morales plays Vic's daughter. But the center of the film is Stu and Vic, and director Michael Dowse (the hockey comedy "Goon") takes liberties with his R-rating, pushing the violence and profanity levels past what would be found in an average buddy comedy.

Clancy's script explores varying ideas of masculinity and the nature of male friendship while still managing to keep things light and moving. "Stuber" doesn't earn a 5-star rating, but it gets to where it needs to go.

Rated R: for violence and language throughout, some sexual references and brief graphic nudity