Documentary filmmaker Nick Broomfield examines Leonard Cohen through the lens of his relationship with his muse, Marianne Ihlen

Documentary filmmaker Nick Broomfield examines Leonard Cohen through the lens of his relationship with his muse, Marianne Ihlen

Leonard Cohen's madness, genius, demons and muses are dissected in "Marianne & Leonard: Words of Love," an enlightening documentary about the creative process and the nature of the artistic spirit. 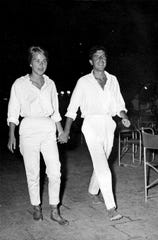 Veteran director Nick Broomfield, who previously examined the relationships between Kurt Cobain and Courtney Love in "Kurt & Courtney" and the Notorious B.I.G. and Tupac Shakur in "Biggie and Tupac," uses Cohen's relationship with his Norwegian muse, Marianne Ihlen, as a gateway to delve into Cohen's life and career.

Ihlen and Cohen met in the Greek island of Hydra in 1960 and spent much of the 1960s intertwined in a love affair. At the time, Cohen was a struggling author and poet. As Cohen found his footing, Ihlen eventually moved to Montreal to be with him, but their relationship fizzled as Cohen focused on his career.

Ihlen became the subject of Cohen's "So Long, Marianne," his sweet goodbye to her, but their love and admiration for one another never died out. The film is framed by a message Cohen sent Ihlen when she was on her deathbed, and he wasn't far behind. They both died in 2016, just three months apart.

With their affair as a backdrop, Broomfield tells the story of Cohen's career and the unlikely rise of the Montreal-bred poet with the full, deep bass voice. He doesn't shy away from Cohen's darkness, depression and drug abuse, or his reputation as a notorious ladies man.

Broomfield does insert himself into the story, perhaps for purposes of full disclosure, by discussing his own relationship with Ihlen. His admission distracts from the story, but Broomfield is frequently a character in his own films, so it's on-brand. Yet the heart of the film remains the love story at its center, a tale of love and forgiveness as rich as Cohen's works.