Based on the children's show, 'Dora and the Lost City of Gold' takes a wise approach in bringing its heroine to the big screen

Based on the children's show, 'Dora and the Lost City of Gold' takes a wise approach in bringing its heroine to the big screen

Fun, funny, wholesome and meta-smart, "Dora and the Lost City of Gold" is a savvy adaptation of the long-running children's cartoon "Dora the Explorer."

This good-natured family comic adventure is wise enough to make fun of itself and its saccharine approach early on. 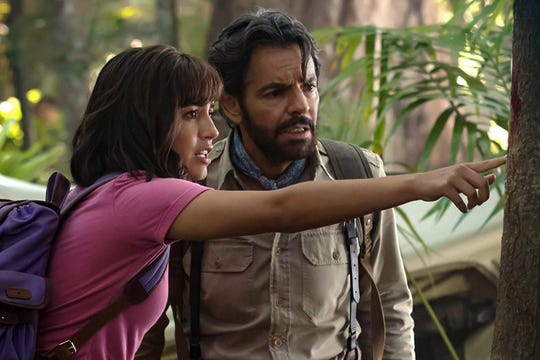 Isabela Moner and Eugenio Derbez in "Dora and the Lost City of Gold." (Photo: Paramount Pictures)

Dora, brought to life by the beaming, eager-to-please Isabela Moner ("Instant Family"), is a child explorer with a voracious appetite for knowledge and nature. She's raised in the jungles of Colombia by her professor parents, played by Eva Longoria and Michael Peña, and is sent off to a different type of jungle when she heads to Los Angeles to attend high school with her cousin and one-time BFF, Diego (Jeff Wahlberg).

The bright and bubbly Dora, a direct extension of the cartoon Dora, is juxtaposed against modern teens the same way the Bradys were essentially transported from their cheery television world into modern society in "The Brady Bunch Movie." It's a wise approach by director James Bobin, who also integrated the Muppets into today's world with 2011's "The Muppets" and its follow-up, "Muppets Most Wanted."

Dora's go-getter nature makes a quick enemy out of the class know-it-all, Sammy (Madeleine Madden). But soon they team up, along with Diego and the dorky Randy (Nicholas Coombe), when they're transported back to the jungle and forced to find Parapata, a lost Inca civilization and the titular City of Gold.

Dropped into the jungle, Dora is at home, and welcomes her guests as she takes the lead in navigating. "The jungle is perfectly safe!" she exclaims. "Just don't touch anything, or breathe too deeply."

What follows is a light-hearted comic adventure with good physical comedy bits, a kiddie "Indiana Jones" that works better than the recent "Jumanji." After coming in contact with a poisonous plant, Dora and her pals even get to re-enter the cartoon realm, a playful nod to Dora's 2-D roots.

The mostly Latino cast — nearly unheard of for a major Hollywood production — also includes Eugenio Derbez ("How to be a Latin Lover") as a rival party seeking Parapata, Danny Trejo as the voice of Boots, Dora's monkey friend, and Benicio Del Toro as the voice of Swiper, a sneaky fox.

"Dora" values togetherness, teamwork and smarts and has a positive message, and is aware enough about its positive message to present it in a cheery, wink-wink kind-of-way.

A straightforward approach to a "Dora" movie would have played to a limited audience. This "Dora" is out to win over a much bigger audience, and what Dora sets her mind to, she achieves.

'Dora and the Lost City of Gold'

Rated PG: for action and some impolite humor