Review: Choose latter option with 'Ready or Not'

Review: Choose latter option with 'Ready or Not'

A new bride is forced to spend her wedding night playing a deadly game of hide and seek in "Ready or Not," a gruesome black comedy that should have never made it to the altar.

Samara Weaving is incredibly game as Grace, whose blue blood, rich-beyond-belief in-laws have an odd initiation ritual for new family members. But there are too many holes in the film's script, and its comic elements aren't strong enough to overcome its logistical shortcomings. 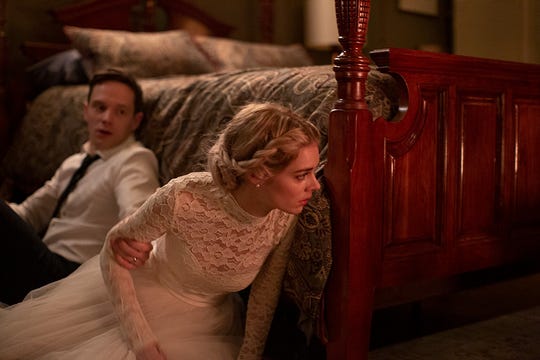 Mark O'Brien and Samara Weaving in "Ready or Not." (Photo: Fox Searchlight)

It's wedding day for Grace and Alex (Mark O'Brien), and Alex is just as nervous as his bride-to-be. "I'm giving you an out. Right now," Alex tells her, but he fails to mention quite what's at stake.

Later that night, Grace, who grew up an orphan shuffled between foster parents, is summoned to a family meeting where she's asked to pull a card from a deck. The card will indicate what game the family will play that night: maybe checkers, maybe Old Maid. She pulls the one card that spells her doom, kick starting a kill-or-be-killed game where she's the prey and her new family members are the hunters.

First of all, what? It's clear Alex's family — dad (Henry Czerny), mom (Andie MacDowell), brother Daniel (Adam Brody) and aunt Helene (Nicky Guadagni) among them — are different, eccentric and drunk with power and from their insane generational wealth. (They made their money in the gaming business.)

But when they're instantly turned into bloodthirsty psychos, it's clear the script by Guy Busick and Ryan Murphy (not the Ryan Murphy you're thinking of) is gunning for social commentary it hasn't earned, and hasn't done enough to foreshadow the transformation.

The eventual explanation for their mad rage is even more of a stretch, giving this tale a supernatural element that shifts it even further from its intent. (At least it looks great, shot in moody, saturated tones that give it a rich, aged texture.)

"Ready or Not" attempts to critique the super rich and the anxieties of marriage but winds up drowning in its own pool of blood. Talk about your marital woes.

Rated R: for violence, bloody images, language throughout, and some drug use