In order to be effective, time-travel thrillers need to be air-tight.

"Don't Let Go" has more holes than a honeycomb.

David Oyelowo stars as Jack Radcliff, an L.A. cop whose niece, Ashley ("A Wrinkle in Time's" Storm Reid), is murdered along with her parents and the family dog in a gruesome killing that Jack himself discovers. 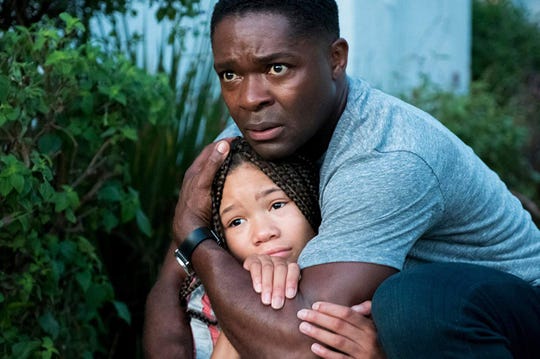 Four days after the murders, Jack receives a phone call from Ashley. (Who's his carrier, and how much does that plan cost?) He learns he can maybe prevent the murders by exploiting a ripple in the space-time continuum, so he goes about the business of reconstructing the timeline of the murders while trying to keep Ashley alive and preventing her from running into his past self.

That's plenty to keep this time-hopping story busy. But writer-director Jacob Estes also tosses in a police corruption plot that may or may not intersect with the story of an underground crime lord named "Georgie," and along the way he breaks yet another fundamental rule of time travel thrillers: he forgets to have any fun.

The logic of "Don't Let Go" never quite holds; well after it's established that Jack and Ashley are co-mingling in alternate timelines, he's still busy instructing her to chew gum and stick it underneath a table so he can discover it in real time. If he can do that, why can't he just get her to safety? Or at least tell her to keep her phone charged?

Oyelowo is convincing as a man confused by everything around him; as a viewer, it's easy to empathize with him. "Don't Let Go" was reportedly significantly recut since premiering at Sundance earlier this year, but the edits can't save a project that was doomed from the start. Someone's crystal ball is cloudy.