Oscar winner J.K. Simmons has made a career out of playing people who aren’t so nice.

Oscar winner J.K. Simmons, who was born in Grosse Pointe, has made a career out of playing people who aren’t so nice. 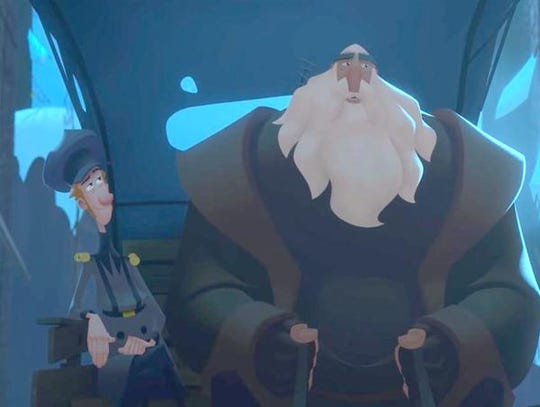 He even revealed which one’s nastier.

So his next character is quite the opposite of Fletcher and Jameson: He’s playing Santa Claus in the animated movie “Klaus,” which debuted Friday on Netflix.

However, he does offer a caveat about his Santa Claus; it isn’t really Santa Claus per se, but a man named Klaus.

“Klaus is not the nicest guy when we first meet him. There’s a real journey for him, so it was fun to play all aspects,” said Simmons. “It’s an ‘alternate origin story’ with some fun twists and turns and all of what you hope a Christmas movie will be.”

In “Klaus,” Jesper (Jason Schwartzman, “Scott Pilgrim vs. the World”) becomes the postman in the frozen, faraway village of Smeerensburg. There, he learns about Klaus, a reclusive carpenter who lives alone in his cabin full of handmade toys. The two men become unlikely friends. Soon thereafter, laughter returns to Smeerensburg and the neighbors become much more generous and kinder to each other as a result, ending an age-old feud.

“Klaus” is the directorial debut of Spanish animator/screenwriter Sergio Pablos, best known for creating “Despicable Me.”

According to Simmons, his take on Santa was more Pablos’ than his.

“He created these characters visually and on the page. I think most of us felt, after we were cast, that our job was to see Sergio’s vision through,” he said. “He’s a genius. And a swell guy. Rare combo.”

“That was a real career milestone for me. Seriously. I love those guys. Like most (baby) boomers and every generation since, I grew up with ‘Sesame Street,’ and our kids did, too. I only wish I’d done it 15 years ago, when (my kids) would’ve thought it was REALLY cool,” explained Simmons.

“I had the chance to work with Kristen and most of the regulars from the original series. A really good group,” said Simmons.

Many of his scenes were with Enrico Colantoni’s Keith Mars.

“(We were) two men of a certain age B.S.ing each other – on-camera and off,” said Simmons.

In addition to “Veronica Mars,” Simmons also appeared in the indy film “I’m Not Here,” co-written and directed by his wife, Michelle Schumacher. Next up is Nov. 21’s “21 Bridges,” starring Chadwick Boseman (“Black Panther”), where Simmons plays the captain who supervises Boseman’s Detective Andre Davis of the NYPD.

“Not gonna lie, I thought it was shooting in NYC, where my son had just started college. We ended up shooting mostly in Philly. Go figure. I did really enjoy working with Chadwick and Sienna (Miller, ‘American Sniper’) and loved our director, Brian Kirk (‘Game of Thrones’),” said Simmons. “(Chadwick) is a great combination of intensity, preparation, and at the end of the day – or night, in the case of this film – he’s a down-to-earth guy, despite his stardom.”

A lifelong fan of the Detroit Tigers, playing the Tigers manager in 1999’s “For the Love of the Game,” directed by Raimi and starring fellow Oscar winner Kevin Costner, was a dream role for Simmons.

“The only thing that would’ve been better was if they let me play the centerfielder, but I was a little too long in the tooth for that,” he said.

“(Leyland) honestly was one of the few guys in my life who’s ever just intimidated me,” said Simmons. “I’ve worked with some of the biggest movie stars in the business and I’ve never felt as tongue-tied as I did when I met Leyland down on the field a few times before a game. He’s one of the all-time great managers and a great human being.”

Even though the Tigers had one of the worst seasons in its history, Simmons still loves them. His advice for the team and the fans is “hang in there.”