Shia LaBeouf writes, stars in and is the subject of this difficult look at a child star's relationship with his troubled father

Shia LaBeouf writes, stars in and is the subject of this difficult look at a child star's relationship with his troubled father

Shia LaBeouf plays his own father in the achingly personal "Honey Boy," which LaBeouf also wrote, while Lucas Hedges and Noah Jupe both play versions of the actor.

This is a cinematic therapy session for LaBeouf, a former child star who has made the difficult transition into adult stardom and become one of his generation's best actors in the process. "Honey Boy" is him wrestling with his own demons, and it's a brave act of public catharsis. 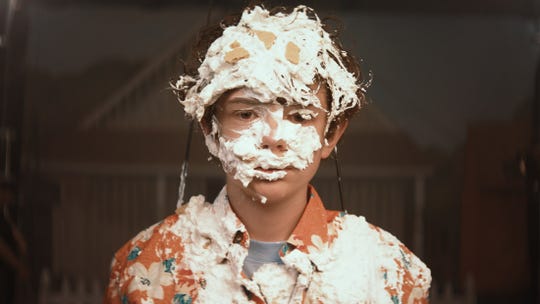 The film is divided into two sections, one unfolding in 1995 and the other in 2005. In the former timeline, Jupe ("Ford v Ferrari") is 12-year-old Otis, a stand-in for LeBeouf, who stars in a kid's comedy series. (LaBeouf himself got his start on the Disney Channel sitcom "Even Stevens.")

Otis is mentally and sometimes physically abused by his father, James (LaBeouf), a slick-talking former rodeo clown and recovering addict jealous of his son's success. They live in a cheap apartment complex that resembles a roadside motel, and Otis develops a tender relationship with one of his neighbors, a gentle soul known only as Shy Girl (alt-R&B singer FKA Twigs).

In 2005, Otis (Hedges) is grown and troubled and off to rehab, where he's confronting the memories of his father. He decides to write a movie about his father, which is where this meta exercise folds into a version of "The Matrix" where every character is LaBeouf.

Director Alma Har'el brings this cherry bomb to the screen with a delicate touch that is handled with the sort of compassion that was clearly lacking in LaBeouf's upbringing. Hedges is explosive, and he nails LaBeouf's erratic cadence and vocal tics, but it's the story of young Otis and his father that forms the charged emotional center of "Honey Boy." If you've ever wondered what's up with Shia LeBeouf, here's your answer.

Rated R: for pervasive language, some sexual material and drug use