Spoiler alert: It's a divorce story.

Writer-director Noah Baumbach's "Marriage Story" is a gutting, cutting comic-drama about the savagery that occurs between two people when a marriage goes south.

Baumbach's been there — his 2005 marriage to actress Jennifer Jason Leigh ended in divorce — and he knows the territory well. He turns in a film that combines the humor and pain of his previous works, with a deeply personal touch that feels raw and uncut. It's not only his most honest, lived-in film, it's the best movie of the year. 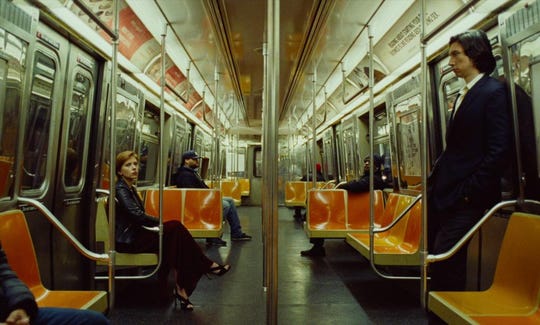 Adam Driver and Scarlett Johansson are both Oscar-worthy as Charlie and Nicole, the splitting couple at the film's center. He's a New York theater director and she's the former teen queen actress who joined his repertory theatre and is now shooting a pilot in Los Angeles. The geographical divide becomes a metaphor for how far they've grown apart.

Baumbach picks up with the couple as they're in a therapist's office, listing off the qualities they appreciate about one another. It's not as simple as "their sense of humor" or "their smile," Baumbach's script burrows into the personal quirks that only come with living with another person for an extended period of time and sharing a life. (Nicole, for example, appreciates the way Charlie always turns off the lights when he leaves a room.)

Their attempts at reconciliation fail, and Nicole heads to L.A. with their young son Henry and serves Charlie with divorce papers when he arrives in town for the weekend. They make an agreement not to involve lawyers, but with custody issues lingering, Nicole enlists a cutthroat attorney, Nora Fanshaw (Laura Dern, fabulous), who's out for blood. In retaliation, Charlie hires Jay (the best use of Ray Liotta in years), who is equally ruthless. The gloves are off, as they say.

Interview: Tough guy Ray Liotta would like to clarify that he's not a tough guy

But this isn't "The War of the Roses" or some other cheesy battle royal between sparring couples. Baumbach handles the story with compassion, tilting the needle slightly in Charlie's favor, since he's the one who's the outsider in L.A., where much of the story takes place. (For Halloween, Charlie dresses as the Invisible Man.)

Charlie can feel things slipping away from him, and boils over during a verbal jousting match with Nicole where words are used like military grade weapons. You ever get mad to the point where you can't believe the things that come out of your mouth? He goes there, and the interaction makes for the most jarring, emotionally charged scene in any film this year. It's a stunner, unfolding with the intimacy of a stage play and hitting like a bitter gust of winter wind.

Baumbach is dealing with heavy material and harsh situations, but he balances the material with humor and heart, finding the humanity in what often feels like an inhumane process. He's done misery before — "Margot at the Wedding" comes to mind — with characters who were so off-putting they weren't worth the emotional investment.

In "Marriage Story," Driver and Johansson draw you in, and turns from Dern, Liotta and supporting players Alan Alda (as another of Charlie's lawyers), Merritt Wever (as Nicole's friend), Julie Hagerty (as Nicole's mother) and Azhy Robertson (as Charlie and Nicole's son) round out an excellent ensemble cast.

"Marriage Story" digs in and puts viewers on the front line of the war when a union based on love turns into a heartless division of assets. It's a triumph, a mix of pleasure and pain that cuts so deep it leaves a scar. It hurts, but it hurts so good.

Rated R: for language throughout and sexual references