Review: 'Jumanji: The Next Level' stuck in glitch mode

Review: 'Jumanji: The Next Level' stuck in glitch mode

Welcome back to the jungle, bring your own fun and games.

Like its predecessor, "Jumanji: The Next Level" is another high-concept, low-payoff exercise in tedium. Dwayne Johnson plays a version of Danny DeVito by doing a bad Jersey accent — that's it, it's just the accent — and if that sounds hilarious, then you'll love Kevin Hart pretending to be Danny Glover by simply talking at half-speed.

Everyone else will want to eject themselves from this nonsensical hybrid of video games and fantasy action. 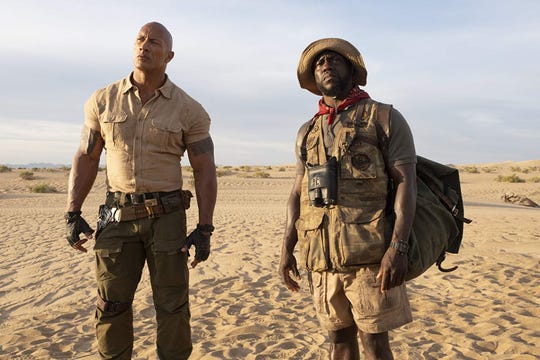 The young foursome from 2017's "Jumanji: Welcome to the Jungle" is back, now college freshmen home for the holidays, and it's not long before they're sucked back into the "Jumanji" video game.

This time they're joined by a pair of old timers (DeVito's Eddie and Glover's Milo), and their video game avatars are jumbled from the first time around; Jack Black, for example, is no longer embodying teenage princess Bethany (Madison Iseman), but rather bulky jock Fridge (Ser'Darius Blain).

Sound confusing? It's not not confusing, but the bigger problem lies with "The Next Level's" lack of dramatic conflict. Are we supposed to care about the in-game conquest, where the characters are trying to steal a precious jewel from an evil warlord? Or is our investment with the characters outside the game, with whom we barely spend any time before they're swapped out for their movie star stand-ins? Co-writer and director Jake Kasdan never makes it clear, because he probably doesn't know the answer himself.

At least Awkafina shows up, doing a better DeVito for the last act of the film, after an in-game MacGuffin lets the characters swap their identities. Confused again? Don't bother. Play an old-fashioned board game instead.

'Jumanji: The Next Level'

Rated PG-13: for adventure action, suggestive content and some language