Review: 'A Good Woman is Hard to Find' is bloody, brutal, raw

Review: 'A Good Woman is Hard to Find' is bloody, brutal, raw

The bloody, moody, stylish crime thriller "A Good Woman is Hard to Find" hits like a hammer to the skull.

Sarah Bolger is quietly ferocious as Sarah, a recently widowed mother of two whose husband was killed. The cops say he was a drug dealer and won't investigate his death. That leaves her grieving and with nowhere to turn, and her son has turned mute since witnessing the murder. 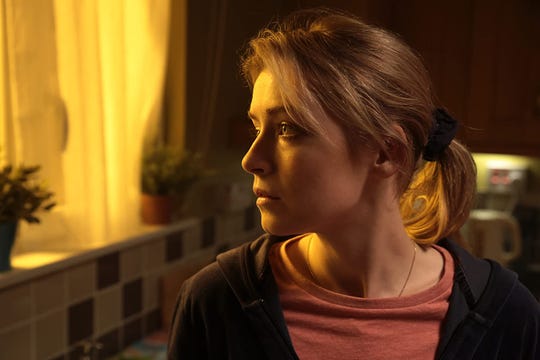 Sarah Bolger in "A Good Woman is Hard to Find." (Photo: Film Movement Plus)

Sarah winds up tangled up in a crime plot when a drug dealer (Andrew Simpson) breaks into her home and hides his dope stash in her bathroom. He gives her a cut of his money in exchange for her silence, but when he makes an unwanted sexual advance on her, she fights back and accidentally kills him. Police are already harassing her and she has a full plate with her children, and she's forced to dispose of the body in an effort to guard the children she loves.

Director Abner Pastoll is unrelenting in his brutality; "A Good Woman" is just as hard-hitting as the Joaquin Phoenix hammer-wielding-assassin thriller "You Were Never Really Here," and Matthew Pusti's menacing score heightens the already tense proceedings.

But he allows humor to soften the hard edges, especially in the colorful performance of Edward Hogg, who plays a grammar-obsessed crime boss who peppers his torture sessions with lessons on the differences between similes and metaphors.

It's blood curdling stuff and it's not for the squeamish, but Bolger ("Once Upon a Time") grounds it and centers it as the story of a struggling mother protecting her loved ones at any cost. And if there's also a grammar lesson or two to be learned, so be it.

'A Good Woman is Hard to Find'