But "Capone" is no Oscar candidate. This isn't the story of Capone any more than a Frankenstein Halloween costume is the work of Mary Shelley, and this blunder will quickly be forgotten, the better for all parties involved. 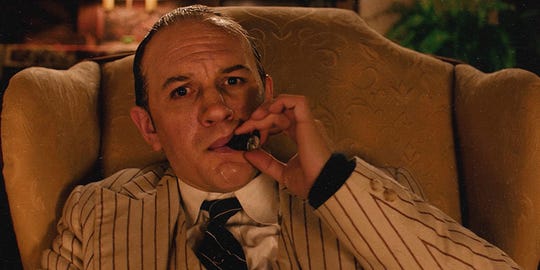 Yes, Hardy plays Capone — everyone calls him "Fonz," short for Alphonse — but he is Capone in his final days, when he's out of prison and dying of neurosyphilis.

This renders him incontinent and leaves him with mad visions and delusions in his mind. Much of "Capone" takes place inside Capone's head, and we see his hallucinations — dark memories, visions of family and lavish parties — made manifest. It makes for a rather unique narrative, since almost nothing actually, well, happens in the movie.

Within this structure, Hardy — who is nothing if not committed — brings his usual might and madness to the role of the notorious gangster.

Caked in pale makeup and carrying around a few sacks of extra pounds, Hardy as Capone is a cigar-chomping heavyweight turned pile of mush.

The voice he gives him is as bizarre as his Bane delivery from "The Dark Knight Rises." It's as if he not only has a frog in his throat, but an entire family of frogs living on a lilypad in his esophagus. It's distracting in the beginning and only grows moreso as the film goes on. After a while, it's all you can focus on.

Which also highlights that there's not much else going on in "Capone." Writer-director Josh Trank, who'd likely rather be remembered for his found footage superhero tale "Chronicle" than 2015's "Fantastic Four," frames "Capone" as an impressionistic view inside the gangster's dying mind. It's a trip you'd rather forget.

Rated R: for strong/bloody violence, pervasive language and some sexuality