Review: Soldiers surrounded by mountains, gunfire in chaotic 'The Outpost'

Thriller is based on true story of 2009's Battle of Kamdesh

Review: Soldiers surrounded by mountains, gunfire in chaotic 'The Outpost'

Thriller is based on true story of 2009's Battle of Kamdesh

There are sitting ducks and then there's Combat Outpost Keating, a military outpost in northern Afghanistan which is located in a valley surrounded by three steep mountains where enemy forces are constantly attacking the soldiers below.

That is the setting for "The Outpost," a breathless based-on-a-true-story military thriller about young soldiers forced to fight their way out of an impossible situation they should have never found themselves in in the first place. 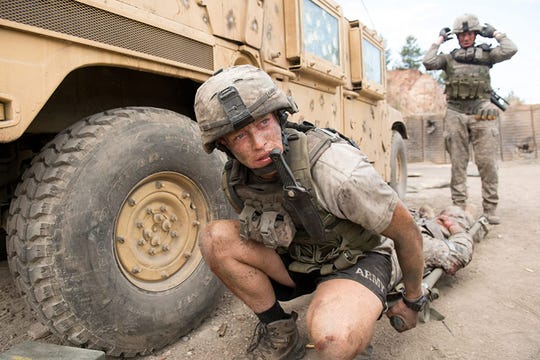 Fire frequently rains down on them from the mountains above, putting the soldiers perpetually on the defense. And a rotating group of squad leaders come in, serve mixed messages — the post is scheduled to close in July, they're told, and then it's not — before moving on to their next assignment.

It's a backdrop of nonstop confusion and chaos, which Lurie — working from a script by Oscar nominee Eric Johnson ("The Fighter"), who based it on Jake Tapper and Paul Tamasy's "The Outpost: An Untold Story of American Valor" — effectively captures, along with the sense of hard-earned camaraderie among the troops.

The second half of the film is essentially a nonstop battle sequence, and it unfolds with hectic, you-are-there urgency. "The Outpost" isn't flashy or pretty, but it's told with a true grit that honors the real life soldiers it depicts.