The Ferndale-based rock quartet will debut its new record at the Magic Bag on Saturday. 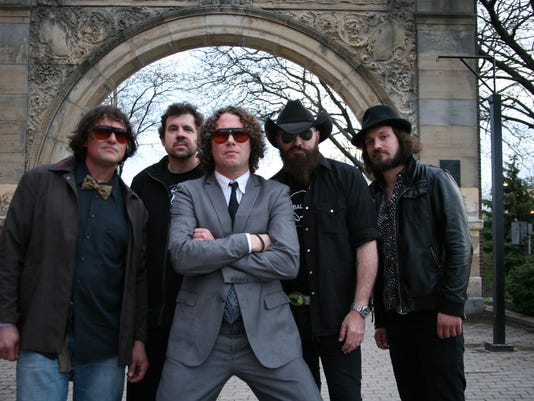 No one on the current Beggars lineup is an original member, but they were all fans who joined over the years.(Photo: Beggers)

Among the four members of the Beggars, it's hard to say who is the biggest Beggars fan.

"There's sort of a commitment to this band," says drummer Jim Faulkner. "It isn't like forming a band off the ground. It's sort of a running legacy, if you will."

The Ferndale-based rock quartet will debut its new, self-titled record at the Magic Bag on Saturday. The band formed in 2002, but none of the musicians in its current lineup are founding members. Even the group's longest-running member, frontman Steve Tuthill, dedicatedly followed the Beggars as a fan before joining up in 2004.

Since he came aboard, Tuthill has become the defining presence in an act that good-naturedly harkens back to the fun-loving swagger of '80s rock. Tuthill is an energetic and flamboyant performer, citing both Michael Jackson and "Macho Man" Randy Savage as influences on his frontman mannerisms. In concert, he's constantly in motion: jumping, prowling, posturing — or, in his signature move, swinging his microphone in a wide vertical circle at the end of its cord.

Bassist James "Pookie" Grech, who joined the band in 2011, has been a Beggars fan since the early days. But Grech says he really got hooked when he saw Tuthill perform with the band for the first time.

"I had never seen a frontman like that in my life, besides other bigger bands like your David Lee Roths and stuff like that," Grech says. "To see him doing it in the Detroit local scene was amazing."

Unlike some of his prima donna hard-rock forebears, there's nothing egotistical about Tuthill. He says the Beggars have persisted over a decade's worth of changing personnel because the band is defined by people who love old-fashioned rock 'n' roll.

"When I was a young man, rock albums kicked ass and they were exciting and they were fun," Tuthill says. "There's not much like it any more."

While the band's previous work has incorporated some soul influences and horn-based hooks, the stripped-back current lineup emphasizes a heavier rock sound than usual on its new release. Eddie Spaghetti, frontman for Tucson garage-rock outfit Supersuckers, produced the record. The band had never worked with an outside producer before, and Tuthill says that Spaghetti's input on the songs was "tough" at first. But the Beggars are clearly pleased with the resulting record.

"You want to listen to it loud," Tuthill says. "If you want to drink a 30-pack of beer, it'll be gone a lot quicker listening to this album than a lot of the other albums out there."

As the Beggars set out to promote the album with local shows and two short fall tours in the South, Tuthill seems on a mission to reclaim the fun of a genre he says has gotten "lost" in recent years.

"Nowadays you've got so many people singing about their feelings all the time — which is great, whatever — but (rock) is escapism," he says. "It's there to make you feel good."

and After Dark Amusement Park