Breaking down One Direction from A-Z 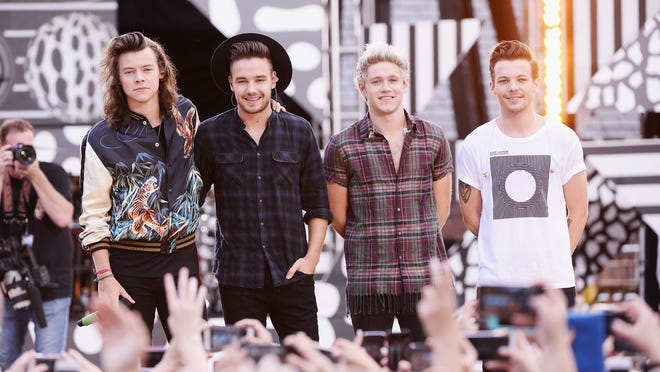 Correction: This story has been updated to correctly describe Zayn Malik's status as the second oldest member of the band.

No one knew it at the time, but the One Direction that visited Ford Field in summer 2014 was the group at its peak.

The British boy band sold out two nights at the Detroit Lions’ home, a spectacular feat drawing roughly 100,000 Metro Detroit fans. The group was a few months away from releasing its fourth album, “Four,” and all five members — Harry Styles, Liam Payne, Louis Tomlinson, Niall Horan and Zayn Malik — were in sync and on stage together.

The One Direction that will take the stage Saturday at Ford Field is a markedly different group. Rather than two nights at the stadium, the group has struggled to sell out just one night, with many tickets still available on the single and secondary markets. Zayn Malik’s sudden departure from the group in March sent shockwaves through the 1D universe and raised fears about the future of the group. And this week kicked off with reports that the group would take an extended hiatus beginning early next year, with many speculating that is code that the end of 1D is near.

Even before those dire reports, One Direction was an atypical construct and was difficult for outsiders to understand. They’re a boy band that doesn’t behave like a typical boy band — they don’t do choreographed dance moves or wear matching outfits; they’re heavily tattooed — whose heavily teenage female fanbase lives and breathes online. One Direction is the first megastar boy band of the Social Media Era, and the experience of seeing them in concert is like entering a real life version of Tumblr.

One Direction still has plenty of blood pumping through its heart — a fifth album is due later this year — and here is a guide for the uninitiated on all things 1D so you can at least sound like you know what you’re talking about if you find yourself in a conversation with a 14-year-old before Saturday’s performance.

B: Boy band. New Kids on the Block and *NSYNC they’re not. Rather than highly choreographed dance moves, 1D members move about freely on stage, goofing off with one another and fans while keeping the mood light at all times. Their total lack of a game plan on stage takes some getting used to, but allows for many spontaneous moments.

C: Controversy. Minor brouhahas have a tendency to erupt around the boys, most blowing up on social media. The latest: group member Liam Payne was criticized for making heteronormative remarks when he told a concert crowd in Columbus, Ohio, last week that the song “Girl Almighty” is about “trying to find that No. 1 woman of your life, which none of you can relate to because most of you are girls.” After a backlash erupted online and he was accused of being homophobic, he responded via Twitter, “I’m sorry to those I offended really I am but there’s no need for some of the things I’m being called.”

D: Directioners. The name given to the group’s fiercely loyal fanbase, which is perhaps the most dedicated in all of pop music.

E: Ed Sheeran. The musician is credited as a writer on four 1D songs — “18,” “Little Things,” “Over Again” and “Moments.” Sheeran was also involved in a love triangle of sorts with pop singer Ellie Goulding and 1D’s Niall Horan, which he detailed in the song “Don’t,” saying Goulding cheated on him with Horan while on tour. Goulding denies the claims.

G: Groupon. Tickets for Saturday’s concert were offered on the discount website Groupon for up to 70 percent off their face value, not a strong sign for ticket sales.

H: Harry Styles. The group’s most high profile and easily identifiable member; he’s the one nonfans can name even if they don’t know any other members of the group. Styles is the heartthrob (clarification: they’re all heartthrobs, but he’s the heartthrob) and the youngest member by five months. Fun fact: Among his many tattoos is a heart on his left arm, so you can say he literally wears his heart on his sleeve.

I: Internet. Online is where 1D fandom really thrives. There is hardly a moment of the band members’ lives that hasn’t been turned into a gif, meme or fodder for Tumblr. On Twitter, where every group member’s words are parsed like the Dead Sea Scrolls and their favorites and retweets are scrutinized like clues in a major investigation, the group and its members post impressive stats: 24.8 million followers for the group’s official account, with the individuals boasting between 25.4 million followers (for Styles) and 15.5 million followers (for Malik, whose follower count took a hit when he defected from the group in March).

J: Julian Bunetta. The producer has been elemental in 1D’s sound; after linking up with the group for three songs on “Take Me Home,” he wrote and produced the majority of songs on “Midnight Memories” and “Four.” The 32-year-old Los Angeles native also has credits on projects by Fifth Harmony, Chris Brown and Colbie Caillat.

K: Kings of Leon. The guys have covered several songs by the Kentucky rock group, including “Use Somebody” and “Sex on Fire.”

L: Louis Tomlinson. At 23, the group’s oldest member is soon-to-be its first father as well: He’s expecting a baby with Los Angeles-based stylist Briana Jungwirth. Tomlinson has earned a reputation as the most business-minded member of 1D, and recently announced plans to launch his own record label. He’s grown to become a prolific writer, co-writing two-thirds of “Four.”

M: Morgan Spurlock. The wacky documentarian (of “Super Size Me” fame) directed the group’s 2013 documentary “This Is Us,” which provided a fascinating behind-the-scenes look at life inside the 1D bubble.

N: Niall Horan. The group’s second-youngest is its only non-English member. (He’s from Ireland.) Horan frequently plays guitar in concert, which sets him apart from his noninstrument-playing bandmates. His looks have been compared to those of celebrity chef Gordon Ramsay, and he seems to be the biggest sports fan in the group. His Instagram account is full of shots of him watching or playing golf, and he was a caddy for professional golfer Rory McIlroy during the Masters tournament in April.

O: “On the Road Again.” The name for the group’s current trek, its fourth headlining outing. The 80-date world tour kicked off in February in Sydney, Australia, and visited Asia, Africa and Europe before touching down in North America in July. Saturday’s concert is the group’s sixth-to-last show in North America before heading back to Europe for five weeks of dates — including a six-night-stand at London’s O2 Arena — and wrapping on Halloween in Sheffield, England.

P: Payne, Liam. The group’s middle member, age-wise, turns 22 Saturday, so fans should be ready to sing “Happy Birthday” to the Wolverhampton, England, native. Payne lays claim to perhaps the group’s most distinctive tattoos, the four arrows on his right forearm. Payne is also a big songwriting contributor, landing co-writing credits on eight songs on each of the group’s last two albums. His favorite movie series is said to be the “Toy Story” trilogy.

Q: Queen Elizabeth II. One Direction sang their “Little Things” for the Queen of England in 2012 at the 100th Royal Variety Performance at London’s Royal Albert Hall. Other acts on the bill included Robbie Williams, Girls Aloud and Neil Diamond.

R: Raiders.“I support the Raiders, said no one ever!” Styles told an audience in Kansas City this summer, sucking up to the hometown crowd and feeding into the Kansas City Chiefs heated 50-plus year rivalry with the Oakland Raiders. Burn! Except the Raiders turned around the next day and tweeted out a picture of Payne sporting a Raiders cap. Better burn!

S: Swift, Taylor. Styles is on the mega-pop star’s long list of ex-lovers. “Out of the Woods,” from Swift’s blockbuster “1989” LP, is said to be about their relationship. Swift and Styles, who are collectively known as “Haylor” (oh, Internet), supposedly dated for several months in late 2012 and — as “Out of the Woods” tells it — were at one point involved in a snowmobile accident.

V: Video Music Awards. The group has been nominated for four MTV VMAs and has won all four, including Best New Artist in 2012 and Best Song of the Summer (for “Best Song Ever”) in 2013.

W: “What Makes You Beautiful.” The group’s hugely popular debut single reached No. 4 on Billboard’s Hot 100 chart. The song celebrates a girl who lights up a room without knowing it, and it’s that lack of self-awareness that makes her so attractive. Or, as the guys sing it, “You don’t know you’re beautiful, that’s what makes you beautiful.” The video has racked up more than 670 million views on YouTube, about 250 million more than the group’s next most popular video.

X: X-Factor. After trying out as individuals, mastermind producer Simon Cowell put One Direction together during the UK’s “X-Factor” in 2010. The group finished in third place, behind runner-up Rebecca Ferguson and winner Matt Cardle.

Y: YouTube. The group’s videos have amassed more than 4.4 billion views, and their page has more than 16.4 million subscribers.

Z: Zayn Malik. The former group member was 1D’s second oldest member and was seen as the group’s moody bad boy. Since defecting in March, he’s tried out a number of bold hairstyles (he went grey!) and has been working on his debut solo album. He also recently made news by calling it quits with his fiance, Little Mix singer Perrie Edwards, and he stirred up trouble with a retweet that implied he preferred rival girl group Fifth Harmony to Little Mix, a minor thing in the real world, but a five-alarm fire in the fanatical world of 1D’s online fandom. His departure from the group was seen as the beginning of the end of 1D, and a generation of young fans may never forigve him.