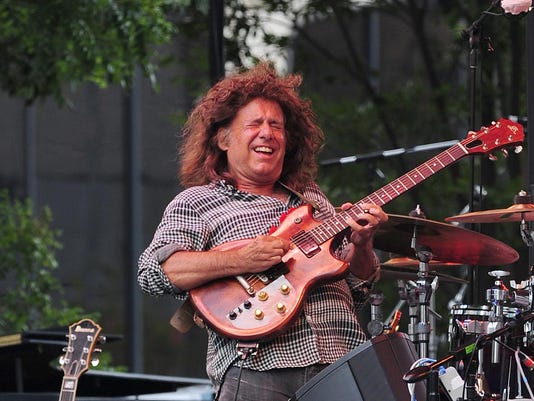 After spending so much of his career as the wunderkind, now at 61, jazz guitarist Pat Metheny is often the mature guy in the room. But if he wasn’t that old (and he started playing professionally at 15), he wouldn’t have been able to meet and play with so many jazz greats from the classic and bebop era who are long dead.

“There’s not a day that goes by that I don’t feel incredibly grateful to have the opportunities I’ve had and to live a life inside music to the degree that I’ve been able to,” Metheny said in a recent phone interview. “The more you learn about music, it affects everything else in a really good way. So no complaints from the guitar department!”

The guitarist returns to town this Labor Day weekend as the Detroit Jazz Festival’s artist in residence, with four major appearances scheduled over the four-day festival.

Metheny points out that he’s not only been able to play and record with many of the greats, but he became friends with some of them as well.

“Charlie Haden, who was one of my heroes when I was a kid, became my lifelong best friend; we were super, super tight for 30-some years. I was the best man at his wedding! Somehow the musicians that I always admired the most as a fan also end up being incredible people, too. Between Charlie and Ornette (Coleman) and Jim Hall, those three guys who are no longer on the planet represent a huge infrastructure in the sort of chronological zone above me that is not there anymore.”

Metheny not only lost those friends and mentors, but in the last few years, both of his parents as well. On the other hand ...

“On the other side, I have three kids ranging in age from 6 to 16, so I have a very fortunate perspective on the whole thing right now. There is some exiting going on, and at the same time, I have this little 6-year-old girl, a princess in the universe,” he said, laughing.

Another side effect of attaining a certain age is that he needs to conserve his time and energy for the gigs, not endless late-night jam sessions. But there’s also the fact that cell phone recording has taken the fun and spontaneity out of jamming.

“For the first 20 some years of my years out on the road, I would always be the one to say ‘Let’s go to such and such club in Poznan, Poland, and sit in.’ But we’re in an era when everyone has phones and film, and it takes the intimacy and the specialness and the fun out of it. Because you’re not playing for those 26 people anymore, you’re playing for the universe, forever.”

The guitarist talks to audiences about it, and there’s an announcement at the beginning of his shows asking people not to film the performance. “But inevitably within 10 seconds, somebody would be doing it blatantly.”

When the world only has one live appearance by jazz trumpeter Clifford Brown to watch, culled from Soupy Sales’ nighttime Detroit variety show, no less, it might seem as if capturing jazz musicians on film for posterity is a good idea.

“I suppose we should be happy anyone cares at all, in the cultural moment we’re in,” Metheny said. “And there’s a slight amount of ‘get off my lawn’ there,” he added, laughing. “I grew up in a different cultural atmosphere that is no longer in existence. It’s adapt, or not. I do my best to adapt, but I have to admit, it changes the fabric of what spontaneity can be right now.”

Another reason Metheny won’t be wandering off to jam during the four-day jazz festival, is that rehearsals for his four gigs will keep him running.

“This time, it’s four performances that are wildly different from each other in almost every way,” the guitarist said. “There’s going to be an incredible amount of gear shifting. From a big band with a video, to a duo with Ron, that’s two extremes right there.”

“I’m so glad I get to share the bandstand both Ron and Kenny, because Detroit is such an important place in American music history. Between Ron and Paul Chambers and James Jamerson, that defines the bottom of music for the 20th century, those three guys just did it.

It goes beyond that, with his Detroit influences.

“Kenny Burrell was huge to me, Elvin and Thad and Hank Jones. It just goes on and on and shows how deep the Detroit thing is before you even get to the famous stuff like Motown.

“And even rock and roll, and electronic music. So much stuff about Detroit is great. Ron and Kenny to me, when I think about both of them, I think they’re incredible modern representatives of what Detroit is to the world.”

“My older brother brought home a Miles Davis record, ‘Four and More,’ when I was about 12, and that was it! It was like somebody walked into a room and turned on a 10,000-watt light bulb. Throughout the years, if I have to list my 20 favorite records, Ron is on 10 of them. What was happening in the ’60s rhythmically, he really defined how to do that with an acoustic bass.

“We have shared the occasional space in the music world, we’ve done a few records with various other people and played together on a few brief occasions, but I feel that this is the first time we get a chance to play together.”

The two went over what they’ll play a few weeks ago, Metheny said. It’ll be mostly standards, with some Milton Nascimento (both played with him) and a couple of Carter’s tunes thrown into the mix. “What we play is almost secondary to how we’re going to play it.”

As for the Gary Burton Quartet reunion Saturday, Metheny will be revisiting a musical relationship he first took part in as a precocious teenager in 1972.

“To become a member of that band at age 18, if I had done nothing but that, I would have been happy, on this entire plane of existence,” Metheny said.

“I often say joining his band was like joining the Beatles, for me. The Gary Burton Quartet of the late ’60s was my favorite band, it was right down the middle what I wanted to hear and what I was interested in. At the same time, I was kind of weirdly experienced as an 18 year old. I had been playing around Kansas City, but still, being around musicians at the level of Gary and Steve Swallow was incredibly inspiring. I was 18 and everything that came with that.”

Today he feels that he’s able to contribute and play more at the same level.

“There are all these mallets flying around and everything is ringing. It’s an instrument that has an incredible visual effect, and is almost mesmerizing to people. Gary is an amazing innovator because of the four mallet thing.

“But Gary has a bottomless pit of melodies. There are just a few people I’ve been around who have that much depth, playing chorus after chorus and coming up with new stuff every time. Beyond the vibes and the technical innovation and the way that he invoked a lot of classical music and rock and all these other things at a very early stage, he’s just an incredibly great melodic player.”

Metheny’s original work “Hommage,” written in honor of the late bassist Everhard Weber, is probably the most complicated of his four jazz fest appearances, requiring rehearsals with the Detroit Jazz Festival orchestra, and working with a video.

“The Detroit guys are unbelievable. They’re playing the piece so well, it’s staggering to me how good it sounds. It was written originally for a German ensemble who also played it very well, but very differently. It’s a challenge to make the piece happen because it involves video; it’s kind of a multimedia thing.

“For people who aren’t familiar with Eberhard, which I am guessing is a lot of people, you’ll get a sense of something different from it. As far as I know, there’s never quite been anything like this. You’re having this virtual musician on screen almost leading the music. My goal was to come up with something good, but also something different in terms of context. I think it’s going to be a nice centerpiece for the evening.”

Metheny also will perform some Alan Broadband-written arrangements of some of his numbers, “and we’ll do a tribute to our mutual friend Charlie (Haden), that’ll be a nice way to wrap (the festival) up.”

Artist in Residence Pat Metheny will appear four times over the course of the Detroit Jazz Festival, which takes place Sept. 4-7, in downtown Detroit, from the Detroit riverfront up to Campus Martius Park: